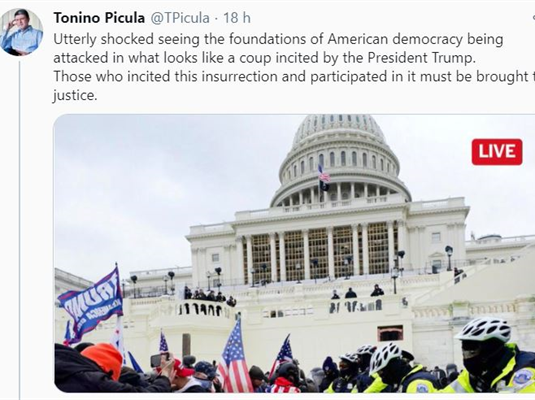 “Trump has violated American democratic institutions from the very beginning of his mandate, and yesterday he directly threatened their existence. He was never interested in governing, and destruction was the main theme of his mandate”, Croatian MEP and standing Rapporteur for relations with the USA Tonino Picula explained regarding riots and violence provoked by supporters of Donald Trump on the occasion of the official proclamation of Joe Biden as new American president.

In the statement of the Socialists and Democrats EP group, Picula, as foreign policy coordinator pointed out: “We look forward to the inauguration of the elected president Biden. We hope that this event will proceed peacefully and with full respect towards the institution of the president and democratic foundations of the United States.”

“We hope that after the victory in the federal state of Georgia, it will be much easier for president Biden to implement his political program. We look forward to the future cooperation in rebuilding and strengthening transatlantic relations, as well as working together on international multilateral order based on fair rules, common values, democracy and rule of law.”

In addition, Picula is a co-signatory of the joint statement of the Committee on Foreign Affairs of the European Parliament, which we present below. “We welcome the US Congress decision to formally certify President-elect Joe Biden’s Electoral College victory and look forward to on orderly transition on 20 January.

We have followed with great concern the deplorable events on Capitol Hill and regret the loss of life and the attack on one of the oldest democracies in the world. We call on everybody to respect the decision of the people of the United States.

The European Parliament stands ready to work hand in hand with the US Congress to promote an alliance of democracies in the face of authoritarian rule. We look forward to a new chapter in EU-US relations that will give new impetus to our transatlantic agenda on issues as crucial as climate change, multilateralism, security and trade.”