Talks with new leadership of Montenegrin government and parliament 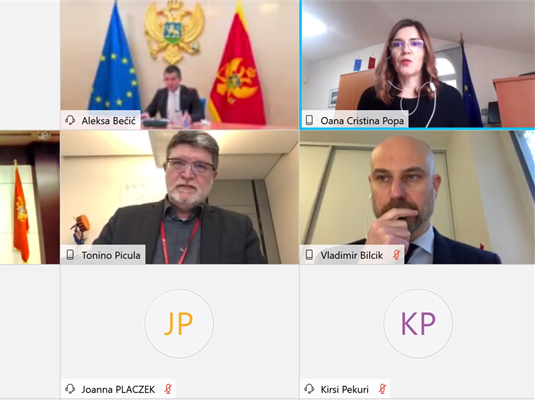 Picula welcomed the process of transition of power that took place in Montenegro for the first time in thirty years, emphasizing the fact it implies the maturity of Montenegrin political institutions and in that sense the respect for the rule of law.

“We expect the new Montenegrin government to continue with reform efforts in order to join the European Union as soon as possible, and in line with the expectations of citizens who support membership by a two-thirds majority.” Picula described the statements of Montenegrin leaders at the first joint meeting as truly encouraging for future collaboration on Montenegro’s European path.

The President of the EP delegation for Montenegro Vladimir Bilčik pointed out that the European Parliament is ready to cooperate with Montenegrin institutions on accessing the European Union as soon as possible and added that Montenegro is still the closest to that scope of all candidates: “We count on you as an ally in NATO and EU.”

The Montenegrin Parliament Speaker Aleksa Bečić affirmed that his country is ready to fulfill all signed international obligations, underlining the work on strengthening the civil sector, internal cohesion of society, reforms and further building a pro-European Montenegro.

“Nothing has changed in Montenegro regarding its attitude towards the EU”, declared Montenegrin Prime Minister Zdravko Krivokapić, announcing additional commitment to reform efforts and emphasizing the need for fruitful reforms, in which Montenegro counts on additional assistance and experience of the European Parliament, and Picula as a rapporteur from a country that holds experience in accessing the Union. Krivokapić announced that at the next session of the Montenegro government is planned to define priority projects through which they want to implement the Investment plan for the Western Balkans. He estimated that so far the biggest issues have been with concluding the 23rd and 24th Chapter, related to the fight against corruption and organized criminal activities caused by lack of political will, which, according to Krivokapić, will no longer be an issue, adding that he expects a stronger regional cooperation.

As a Rapporteur, Picula posed a question about the structure of the continuation of negotiations and reminded about the soft spots of the insofar process such as freedom of speech. He also showed interest in relations of Montenegro with China and Russia, as well as relations with Serbia marked by tensions.

Krivokapić announced that during the negotiations process nothing will be changed when it comes to Montenegro, besides strengthening the role of main negotiator with more political will regarding implementing everything that is technically set by the negotiation process. Speaking about the freedom of speech, Krivokapić underlined the necessity of depoliticisation of “Radio Television of Montenegro” and its transformation into a service for citizens.

Moreover, he announced modifications of The Law on freedom of religion in Montenegro, which caused protests before the elections in that country, revealing that the Law will give measure in the relation between the Church and the State, emphasizing that Montenegro remains a secular state. He also called on European officials to participate with greater engagement and suggestions regarding the best way to implement the reforms.

Deputy Prime Minister Dritan Abazović commented on relations with Russia and China, as well as relations with the EU. He stressed that Montenegro wants to pursue a common policy towards Russia and China, but that it is extremely important for Montenegro to maintain and improve relations with those countries, which are also significant investors in Montenegro. On the other hand, it is precisely the changes in the definition of foreign investment that they want to enable more investments from EU member states, and provide their citizens with more economic opportunities. He assessed that in order to achieve such a result, the establishment of a new economic diplomacy is much needed.