Use renovation to build new infrastructure! 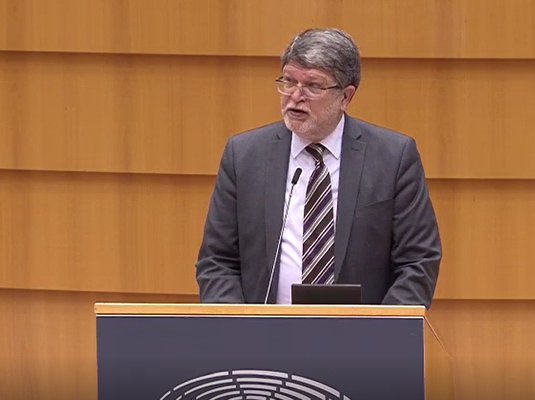 “The European Commission, the Council and the Government of the Republic of Croatia are obliged to urgently provide all victims of the earthquake adequate accommodation and financial assistance, transparent rules for its use, in addition to building a better system of assistance in natural disasters, because the existent one in Croatia proved to be insufficient”, Tonino Picula emphasized at today’s plenary session of the European Parliament dedicated to the adoption of the Resolution of the European Parliament on earthquake mitigation in Croatia.

On behalf of the Socialist and Democrat political group, Picula negotiated the provisions of a resolution by which members of the European Parliament support Croatia and demand that the Commission, the Council and the Government of the Republic of Croatia act quickly to mitigate the consequences of the earthquake. In his speech, he stressed that it is extremely important that reconstruction in Sisak-Moslavina and Karlovac counties, as well as all earthquake-affected areas be guided by the principle that all destroyed and damaged facilities must be rebuilt in accordance with the highest existing safety and seismic standards, which was not the case during post-war reconstruction, and it is the reason why so much damage was reported to residential buildings. That is why, in his speech to his colleagues in the European Parliament, he called for research into post-war reconstruction in the earthquake-affected areas.

"It is also important to use the reconstruction as an opportunity to build basic infrastructure that did not exist before the earthquake, to create targeted measures to prevent emigration and thus support the development of this neglected area", Picula concluded.

Among the most important provisions of the Resolution being voted on are those on the need for the Croatian authorities, together with Commission experts, to quickly and thoroughly assess the total damage in Sisak-Moslavina county in order to begin reconstruction work as soon as conditions allow. He emphasized that great importance must be attached to fostering sustainable economic revitalization and the availability of sources of income for people when reconstruction and reconstruction begin in the region. MEPs call on the Croatian authorities to closely monitor the implementation of post-earthquake reconstruction and ensure that all activities comply with the highest seismic standards and requirements for buildings and infrastructure, and suggest, as appropriate, the application of professional practices and expertise from other Member States.

Furthermore, they emphasize the need for the Commission to include targeted measures to deal with earthquakes and their consequences in the planning and legislation of the reconstruction wave, and encourage Croatian authorities to therefore include these measures in their planning and programming of EU budget allocations in 2021-2027. They also call on the Commission to show flexibility in programming and amending national operational programs when it comes to dealing with natural disasters. MEPs call on the Commission to take into account the fact that Croatia is simultaneously fighting a pandemic and a series of devastating earthquakes when granting financial assistance, and to simplify the relevant procedures to enable effective and rapid assistance and to respond to the immediate needs of the population.

No less important, they called on the Commission, in cooperation with European and Croatian institutions, to devise a rapid way to allocate the necessary financial assistance and provide other support to ensure a speedy recovery of the affected areas. In the approach to vaccination against COVID-19, it is important to give priority to the inhabitants of the affected areas, the MPs emphasize and encourage the Government of the Republic of Croatia to implement its decision to redirect a significant part of its vaccine stock to Sisak-Moslavina County. in the field, and point out that in the unpredictable circumstances that follow, it is necessary to continue to provide priority medical and psychological assistance to those affected by the earthquake.

Lawmakers commended rescue units, civil protection forces, the Croatian Army, volunteers, civil society organizations, international organizations and local, regional and national authorities, which immediately took action in the devastated areas and continued to work to save lives, limit damage. and guaranteed basic activities to maintain a decent standard of living, and thanked all individuals, organizations, and initiatives that supported those efforts and sent support and assistance.

They also welcomed the solidarity of Member States and other countries providing support in this crisis situation in the form of mutual assistance, including basic necessities, financial assistance, volunteers and other assistance, which contributes to reducing the burden of intervention. They welcomed the solidarity shown by the EU institutions and the international community in the form of mutual assistance in crisis situations, as well as the Commission's rapid and timely response and the presence on the ground of Commissioner for Crisis Management Janez Lenarčič.