The crime in Srebrenica is genocide 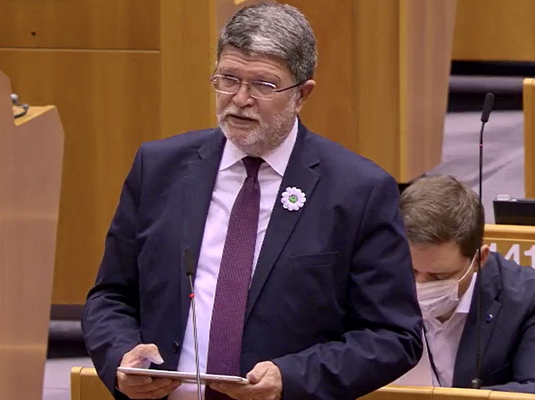 It is our duty not to allow crime to triumph subsequently

A commemoration on the occasion of the 25th anniversary of the Srebrenica genocide in Bosnia and Herzegovina was held in the European Parliament today, at which Croatian MP Tonino Picula emphasized the need to fight genocide denial and protect victims from profiteering for daily political purposes.

Today, with great sadness and deep piety, we are remembering the greatest tragedy in the European continent since Second World War, that is genocide in Srebrenica. 25 years have passed, but the desolation for the victims and horrifying memories of the event still grow strong. Five years ago, the European Parliament passed a special resolution on the genocide in Srebrenica, Picula said.

Consolation for those who have lost their dearest is still missing after all these years. However, as it is important to identify the remains of the genocide victims, it is equally important for their families to clearly identify the crime and the perpetrators. The courts in the Hague, Bosnia and Herzegovina, Serbia and Croatia have convicted 47 of the accused for more than 700 years of prison sentences for participating in the genocide in Srebrenica.

Yes, the crime in Srebrenica is a genocide and it deserves being named that way. We have verdicts from The International Criminal Tribunal for the former Yugoslavia and the International Court of Justice. But as the time passes our obligation to protect the victims and their families from a programed oblivion directed by political engineering will only grow stronger. And that kind of attempts will surely recur, starting from awarding the Nobel prize to those who deny the genocide to the campaigns of misiniformation sponsored by various authoritarian regimes, he averted.

Picula emphasized that the common European duty is to not allow crime to triumph subsequently: We owe this to the Srebrenica victims, but also those from Ovčara and other mass execution sites on the areas where the Greater Serbia project has left its mark.

He evaluated that defending the truth about past is opening a better future for the upcoming generations.The richness of Bosnia and Herzegovina is its multi-ethnical society. Unfortunately, political structures in the war times are frequently slowing down a veritable progress of that country. Its particularities, different nationalities, cultures and religions deserve a full appreciation, a their equality is the best stake for the European future of Bosnia and Herzegovina.

Clear perspective on Bosnia and Herzgeovina’s EU membership is owed to all the victims, but also to the young community, who will, I certainly hope, live in prosperity united in difference under the auspices of European Union’s citizenship, Picula concluded.