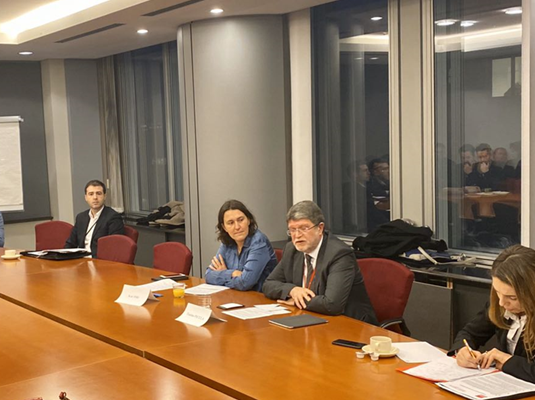 Picula, together with Kati Piri, vice president of the S&D Group in charge of foreign affairs, presented last night the S&D group's position on EU enlargement and its views on the methodology and future of the negotiation process.

"The Western Balkans enlargement process can give new impetus to our common European project by launching the necessary reforms within the European Union after the Brexit experience", Croatian MEP Tonino Picula, coordinator of the Socialist and Democrats group in the Committee on Foreign Affairs of the European Parliament and rapporteur for Montenegro and recommendations for the Western Balkans ahead of the Zagreb Summit, said during a press conference last night in Brussels.

Tonino Picula, together with Kati Piri, vice president of the S&D Group in charge of foreign affairs, outlined the group's position on EU enlargement, as well as views on the methodology and future of the enlargement negotiation process.

"By failing to open formal negotiations with North Macedonia and Albania, the European Union is embroiled in another crisis, a crisis of credibility with the Western Balkan countries, and it is up to us now to overcome that crisis as soon as possible, and the Zagreb summit is the right opportunity for that. Today we have outlined the principles that underpin the recommendations for improving the extension methodology, which I intend to present in a few days. The European Union will remain an unfinished project until it completes the enlargement process in the Western Balkans", Picula said.

Ahead of the presentation of the S&D Enlargement Principle, Picula also met with European Commissioner for Enlargement, Oliver Varhelyi, in the European Parliament today. They discussed the European Commission's communication on a new methodology for the EU enlargement process to be presented by Varhelyi on Wednesday and recommendations for the Zagreb summit, whose draft Picula presents as a rapporteur on Friday. Picula's report will also be the European Parliament's official position on the new enlargement methodology.

At S&D, they are aware that changing the global context also necessitates the need for internal EU consolidation and its decision-making procedures, which means that the methodology of the enlargement process needs to be improved to keep the Western Balkan countries motivated to carry out reforms. The existing negotiating frameworks were created in 2003 under other global conditions, when the EU played a different role. Although the process is continuously improving, there is still room for improvement that will emphasize the importance of establishing sustainable development of democracy in aspiring Member States, as EU membership is objectively the only reasonable prospect for the Western Balkan countries, despite numerous geopolitical challenges and changes in the European Union.

S&D believes that the new enhanced enlargement process should rest on the following principles:

Full membership is the final goal;

Equal rules for all candidate countries, with particular emphasis on the need for the EU to refrain from changing the rules in order to satisfy the internal political interests of individual members;

The logic of conditionality must be improved in such a way that, by fulfilling certain conditions, the candidate gains the right to use some EU programs;

The European Green Plan in the Western Balkans, which means that climate change, development, human rights and security must be taken into account as a condition of accession, that is, candidate countries must become part of this transformation process;

Participation in a conference on the future of Europe, where candidate countries would contribute to shaping future policies

In addition to these principles, the priorities of public policies in the enlargement process must be focused on addressing today's challenges for the countries of the region, which is why the emphasis should be on the following:

Rule of Law and Chapters 23 and 24: Member States should provide more technical assistance in the implementation of these requirements, especially in the area of fight against corruption and organized crime, so that they immediately proceed to the analysis of legislation covering these chapters when opening negotiations;

Stability and security: The EU must enhance its ability to help stabilize its neighborhood, with a focus on the members themselves and their immediate neighborhood;

Cooperating to combat cyber threats and the spread of misinformation, and to align more closely with the EU's common foreign and security policy;

Social and economic cohesion, including the definition of labor and social rights standards in line with EU standards, which must be a prerequisite for a successful accession process;

Environmental protection, which means that candidates will have to prove that they are able to implement EU environmental standards;

Read more on the following links.