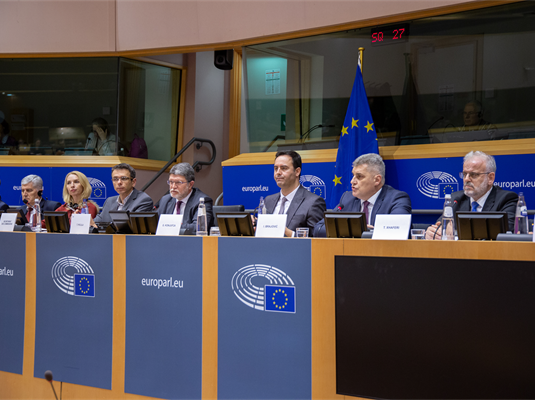 MEP Tonino Picula chaired the meeting with the presidents of the parliaments six western Balkan countries, in the European parliament.

"The European future of the Western Balkans will depend on your commitment to the rule of law and mutual support in the process of accession to the European Union, until full membership. It is about credibility, which in turn will also allow the reunification of the EU member states in terms of enlargement policy, which is currently in crisis. The Zagreb Summit in May will be important for the future of enlargement policy and it is clear that we do not have time to lose. The meeting and its joint declaration are prime examples of parliamentary diplomacy in times when there is a lack of strength in intergovernmental processes", said Picula.

In a joint statement by the President of the European Parliament, David Sassoli, and the President of the Parliaments, the commitment to a 'new approach' to enlargement was emphasized with the aim of democratizing the process, increasing its transparency and bringing it closer to citizens. Enlargement is a process that requires great effort and commitment from all parties, and parliaments are key to fostering a reform agenda. The European Parliament is ready to continue its constructive dialogue and support for the Western Balkan parliaments in their approach to the European future.

"The crisis of enlargement policy, which came as a result of the EU's inability to solve its internal problems on its own," Picula stressed earlier, has also called into question the credibility of the EU after not opening negotiations with Albania and Northern Macedonia.This is also a part of the context in which this meeting took place."

We would like to remind you that on 5 February the European Commission will present its proposal for a new methodology for the enlargement process. Picula is currently working on proposals to improve the enlargement methodology on behalf of the EP in the form of European Parliament Recommendations ahead of the Zagreb summit. The presentation of the draft recommendations is expected on 7 February and the final adoption of the recommendations at the European Parliament plenary in April. At the same time, Picula is participating in the drafting of a new pre-accession assistance program, IPA III, the most important tool the EU provides in bringing future members to the Union, and has also been appointed as Standing Rapporteur for Montenegro.