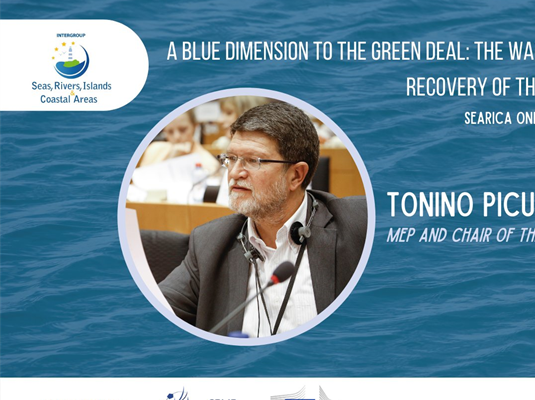 On 28 January, Tonino Picula, Croatian Member of the European Parliament and Chairman of the EP Intergroup on Seas, Rivers, Islands, and Coastal Areas, together with Commissioner for Environment, Oceans, and Fisheries Virginijus Sinkevičius, opened the conference “A blue dimension to the Green Deal: the way towards a sustainable recovery of the blue economy in Europe” organized by the mentioned Intergroup

"Climate change is not just a matter of environmental protection, but of economic and social change. The outbreak of the COVID-19 pandemic has pushed the whole world into unknown waters. The maritime sector, which employs five million people in the EU, is under great pressure, from fisheries to strategic infrastructure such as ports and rivers, supply chains and transport, coastal and maritime tourism", Picula said, adding that the maritime sector and coastal areas can provide key contribution to the objectives of the European Green Deal.

The seas and oceans, rivers and islands are more than ever a solution to the strategic challenges facing the EU, he said: “They are at the heart of climate change, food supply, the answer to growth and geopolitical challenges. The blue, maritime economy can recover quickly from the crisis, contribute to the goals of the European Green Deal and become truly sustainable: environmentally, economically and socially."

At the conference, Sinkevicius presented the Commission's initiative for a new approach to the sustainable blue and maritime economy of the European Union and achieving the goals of the European Green Deal on the seas, axes of decarbonisation, zero pollution, circularity and biodiversity. On these axes and priorities, the Commission will also offer guidelines for programs in the 2021-2027 budget period.

He thanked the Intergroup for the successful cooperation so far and added that based on the initiative, consultations and preparation of a legislative package have already been opened.

"In the European Union, there is no sustainable blue economy without a scientific basis. That is why one of Portugal's priorities is to provide adequate support to scientists and invest in scientific diplomacy", said Portuguese Minister of the Sea and Fisheries Ricardo Serrao Santos, representative of Portugal, the presiding member of the Union.

In line with other framework initiatives planned or adopted by the Commission, it identifies specific desired transformations of individual sectors of the blue economy that serve as guidelines for public and private sector activities, with particular emphasis on all blue economy activities taking into account primarily environmental requirements. The aim is to completely avoid environmental damage or reduce it to a minimum.

With a comprehensive approach, the Commission envisages that all activities also produce positive externalities, including adaptation to climate change. The proposal emphasizes the need for greater citizen engagement and regional cooperation.

The Commission plans to foster the recovery of the blue economy and its resilience through support for sustainable solutions, innovative products and services and new emerging sectors, which have a high employment potential and low environmental impact. Thus, they plan to strengthen the European research and development sector and faster and more efficient realization of the goals of the European Green Deal.

Following the BlueInvest initiative, the EU is preparing new tools to support innovative SMEs in the blue sector, and ways to support investments in a sustainable maritime economy, as well as new mechanisms for developing the skills of maritime workers and coastal communities.

According to the Commission, such an approach should confirm the leading role of the European Union in environmental technologies and sustainable use of marine and ocean resources, as well as its ocean management policy.