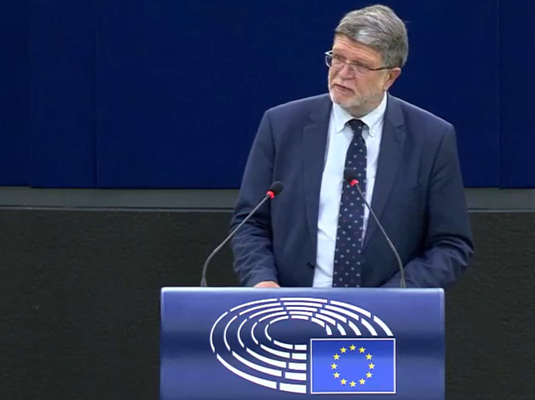 As a rapporteur, Tonino Picula gave speech on the adoption of the IPA III package in the European Parliament

“I would like to thank everyone for their dedicated work over the past two and a half years. Today’s debate is the last formal step towards implementing a new, better financial instrument for pre-accession assistance - IPA III. Briefly, the new generation of IPA will strengthen democratic, normative and social-economic transformation of the candidate countries for EU membership", said in his speech on the occasion of the adoption of the IPA III package of pre-accession assistance, the Croatian Member of the European Parliament and rapporteur Tonino Picula. The entire speech is below.

“The new instrument will provide smarter, better targeted, more visible and sustainable support to candidate countries and potential candidate countries on their path to the EU and in facing common challenges. The Union’s enlargement policy is inextricably linked to values such as liberal democracy, respect for human rights and rule of law, which we as a Union must not deviate from. It is therefore good that the new IPA III will particularly insist on this. Furthermore, IPA III will strengthen strategic communication and combat misinformation, while contributing to the cross-sectoral objectives of climate and environmental protection, human rights and gender equality. IPA III is focused on the future, taking into account its own initiatives and goals, like for example the European Green Deal. The allocation of funds under IPA III will be based on a performance-based approach and the principle of equitable distribution.

This means that assistance will vary in scope and intensity according to user performance. At the same time, the principle of fair share will be applied to ensure that the volume and intensity of funding take into account not only the performance of the beneficiaries but also their needs and capacities. We want to avoid a disproportionately low level of assistance to some and ensure the progress of all users. As a member of European Parliament, I think we can be pleased with what has been achieved, in the context of the thematic priorities, and the institutional role of the European Parliament.

During the negotiations, Parliament ensured improved governance of the instrument in the context of the expanded use of the delegated acts procedure and improved geopolitical dialogue with the European Commission. These mechanisms will allow Parliament to define the main strategic directions and carefully examine the decisions taken under that instrument. Our goal was to apply the lessons learned from the previous, IPA II instrument, and our motive was to help these countries and their predominantly pro-European citizens. Although the EU membership perspective has lost some of its transformational power, it is still the most effective impetus for the comprehensive political, economic and social reforms in the Western Balkans available to the EU.

For all those who are wondering why we are allocating so much money for the preparation of, I hope, future EU members, I would like to make a few arguments here:

• Enlargement policy is important because it enables the EU to promote and insist on important reforms in candidate countries.

• It is important because all parties included benefit from the process. The data show that the old member states have also benefited in terms of economic growth and job creation, thanks to previous EU enlargements.

• Enlargement policy promotes socio-economic cohesion even before accession, addressing some of the main concerns of EU citizens regarding migration and social dumping.

• Equally, it offers the EU a leading role in the region. Currently, Russia, Turkey, the Gulf countries, as well as China, compete with each other and with the EU for economic and political influence in the Western Balkans, too often with completely different interests from ours.

• It is also important because it helps prevent and manage potential crises and conflicts.

• And perhaps most importantly, it increases the EU's credibility and sends a positive message for a better future for the Union itself.

These days, the component of strengthening good neighborly relations seems to be especially important, which we have highlighted in Parliament as one of the priorities. Recent events in Montenegro are the best indicator of the consequences that the lack of reforms and the politicization of religious events with a third-party support may have on the division of society and security in the country. I want to emphasize that often EU support is the highest in the most polarized societies, and it is EU membership as a common goal that can be a cohesive factor. The IPA instrument is in fact the financing of the long-term interests and values ??of the Union. Our financial investments must match our ambitions to be geopolitically relevant in the Western Balkans and Turkey. Over € 14 billion is a significant amount of economic aid. But funding cannot replace a credible enlargement policy. They can supplement it, but not replace it. Northern Macedonia and Albania have been waiting unjustifiably long, they have done and are doing more than some of the member states. Kosovo has long met all the criteria for abolishing visas. It is time to finally acknowledge their efforts with concrete decisions."