EU catching up with economic solutions to the pandemic 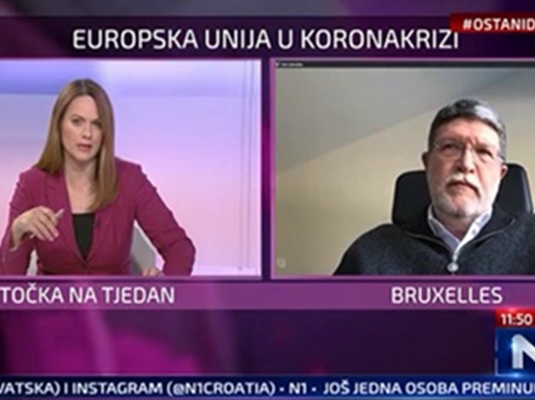 Croatian MEP Tonino Picula made a guest appearance this week on the N1's "Točka na tjedan", discussing the European response to the corona  virus pandemic with editor Nataša Božić Šarić. He estimated the European institutions' delay in the corona virus epidemic caused some reputational damage.

"It is certain the reaction could have been faster", Picula said. He went on to say the Member States have been left with a great deal of space to react in their own way, which in turn has left many citizens with the impression they should rely more on  national mechanisms than on EU assistance. "Now things are improving, and there should be some understanding. The EU as a separate multilateral state is not a common state, but a community of states, and has not bonded enough in many elements to make quick decisions. It is a mechanism that works well when all is well. However, in the last 10 days have seen a faster pace of the European institutions", Picula said. He thinks that citizens' frustration is in part  justified, but he does not believe that a corona virus will mark the end of the European Union.

Regarding the Eurobond possibility, he said it is a story that has been around for years and was on the agenda during the last financial crisis. It was rejected by Germany, and even now Member States from the north are not keen on the idea. Picula thinks this economic crisis will be different from the 2008 one which came from the US. Asked if it was clear how the SURE aid package would be distributed to Member States, Picula replied the mechanism itself was not fully communicated. An arsenal to assist those who are self-employed or in  particularly vulnerable industries in this situation was apparently used.

"The package also introduces something that was unthinkable until yesterday: the maximum flexibility in spending money from European funds", Picula explained, adding that the package will be supported in both the European Parliament and the European Council.

More at the link.