Stop violence against protesters in Belgrade 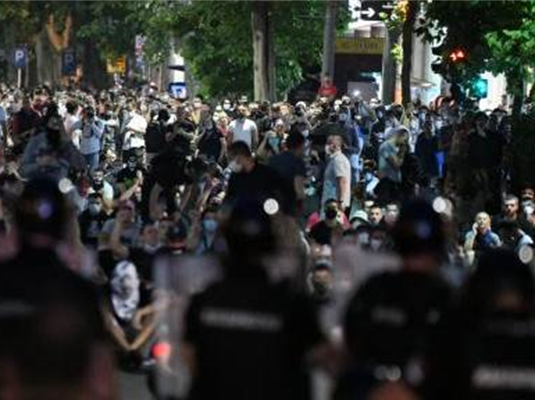 Croatian EPM Tonino Picula, member of Socialists and Democrats, commented on the situation in Serbia. In continuation we are bringing Picula’s statement in its entirety.

The scenes of police brutality against protesters on the streets of Belgrade are shocking. Peaceful protests of the citizens against irregularities of Serbian government and the president Aleksandar Vučić in managing the corona crises and the announcement of the new police hour after the elections have escalated precisely because of the behaviour of repressive institutions.

Citizens of Serbia and other countries have been able to see the pictures of violence only because of the few media reporting, such as N1 Television and Nova.rs who are not under the control of authorities in Serbia, but who report regularly on the magnitude of COVID-19 pandemic.

I have been disappointed by incoherent accusations of Serbia's prime minister Ana Brnabić on Pink television, which have no proof nor foundation, that me and two colleagues from the EP and the Council of Europe are fueling the riots in that country. Unfortunately, this is a result of a repressive police authority against the freedom of the media that has also reflected in disagreement of few EU members about continuation of negotiation chapters. This kind of rhetoric is simultaneously reminding about Vučić’s diminishing the importance of EU’s material and financial help in Serbia when fighting the pandemic.

I am hereby inviting Serbia’s leaders to withhold from violent reactions against riots in Belgrade and in Serbia, and the protesters to calmly present their substantiated demands. I am also expecting from my colleagues in European People's Party, that as a member includes Vučić’s party to stop the counterproductive policies towards countries in Southeastern Europe, along with tacit approval, and to abstain from direct support of the similar parties whose policies and values are in direct opposition of common European values.

As a member in the European parliament during the last six years I have been working continuously on opening the perspective for membership in the EU for countries in Western Balkans in a whole series of my duties, and especially as a President of the Western Balkans Working Group, EP Rapporteur for Enlargement Recommendations, and Rapporteur for Montenegro and the new IPA III pre-accession assistance package.

That is why in the Recommendations for the EU enlargement in the Western Balkans we have requested to bring forth democracy and the reign of law, apart from human rights and fundamental freedoms and make them priorities for the enlargement process. We are asking to open first the chapters concerning justice system, corruption and organized crime, in addition to chapters related to human rights, including the minority’s rights, freedom of the media and close them last. It was the dissolving of democratic institutions in Serbia and strengthening of Vučić’s authoritarian practices among Serbia’s key obstacles towards tangible progress in the European Union.