We’ll leverage the Green Plan only by enhancing capacities 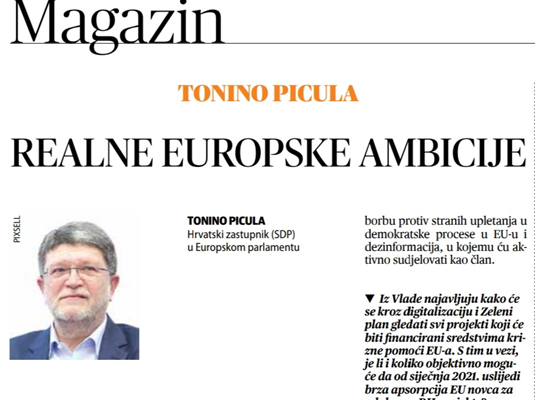 Croatian Member of the European Parliament and President of the EP Intergroup for Seas, Rivers, Islands, and Coastal Areas, Tonino Picula, gave an interview to Glas Slavonije on October 3rd, talking about the real European ambitions of the Green Plan, digital and energy transition

When it comes to energy strategy perspective and the competitiveness of the new European Green Deal, Picula predicted: Europe must harness the potential of green transition and digital transformation that are key to achieving the goals of the Green Deal. Together with the industrial strategy, the new circular economy action plan aims to modernize the EU economy and seize the opportunities of the circular economy for the domestic and global economy. The main objective of the new policy framework will be to encourage the development of leading markets for climate-neutral and circular products, inside and outside the EU.

As new technologies increase the impact on many segments of modern life, including the sanitary and informational benefits for citizens, Picula explained: The new digital strategy, therefore, reflects European ambitions in the business world. It aims to create collaborative data centers that will also help combat future health and safety threats, in addition to creating ethical apps based on artificial intelligence, which is a uniquely significant challenge in the era of fake news and deep fakes. The importance of the fight against fake news is also indicated by the fact that last week in the European Parliament we finally started the work of the Special Committee on Foreign Interference in all Democratic Processes in the European Union, including Disinformation, in which I will actively participate as a member.

Picula also referred to several active instruments of the European Union, including the Just Transition Fund that is incorporated in the cohesion policy, but, despite its importance, it has been cut, and together with his European colleagues they firmly oppose this. However, as Picula informs, budgets have been increased for the programs such as the European Agricultural Fund, Digital Europe, Horizon Europe, resc-EU, and SURE, all of which focus on long-term efficiency and sustainability of all the economies included.

Regarding Croatia, Picula analyzed: If we do not dramatically increase the absorption capacity of EU funds, it is unlikely that the extensive financial support for the period until 2027 and the European recovery fund will be the crucial turning point. Let me remind you, Croatia was a poor performer with the absorption rate of the European Structural and Investment Funds for the period 2014-2020 of only 39 percent (until September 23, 2020), and we are expected to receive a grant of more than 10 percent GDP, with a potential additional 6.8 percent of GDP in the form of loans.

Continuing on the issues that will comprehensively dictate the European environmental future, along with the safety and instructional development of the citizens and their indispensable relation with the clean forms of energy, Picula explained: The growing potential of digital technologies is important in surpassing crescent economic, social, climate and environmental challenges that agri-food sector and rural areas are facing. Our agriculture and rural areas must fully benefit from the continuous digital transformation of our economies and societies, which I insisted on when I provided the first funds allocated for this purpose, in the amount of two million euros, with amendments to the budget for the energy transition in rural areas. Increased use of digital technologies will also have a positive impact on the quality of life in rural areas and may attract the younger to agriculture. It is, therefore, necessary to insist that everyone, including small and medium-sized farmers, can access and benefit from the technology. Digital technologies can increase the efficiency of the farms while also improving economic and environmental sustainability, which represents the essence of the European Green Deal. Within the Green Deal, new strategies have been presented, and those are Farm to Fork strategy and Biodiversity strategy, with an emphasis on a sustainable alimentary system that can bring environmental and social benefits, as well as offer economic profit and ensure biological diversity.