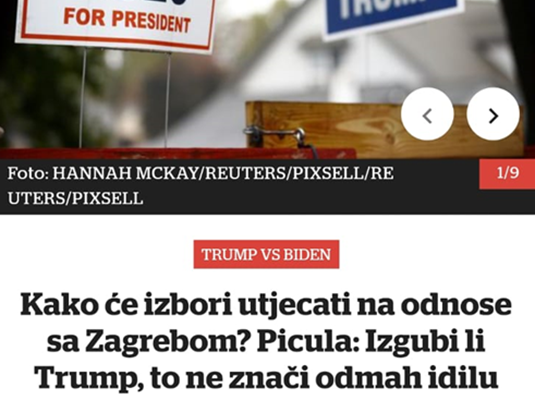 Tonino Picula, Croatia’s Member of the European Parliament and EP’s standing rapporteur for relations with the United States commented on the results of the current US presidential election for "Vecernji list" on November 3rd

Picula stated in the interview for Vecernji that the Democratic candidate Joe Biden would certainly treat his allies as true partners more than Trump, but that the return to ground zero of the seemingly idyllic relations that preceded Trump is quite dubious.

He also acknowledged that the European Union feared riots in the USA, but, if Biden wins, EU and NATO can expect to be treated “as allies, and not as economic rivals that merit difficult business.”

“In my opinion, if Biden wins, he will almost exclusively turn to the domestic agenda, which is the suppression of the COVID-19 epidemic, the following crisis, as well as the growing social, societal, and racial tensions in the country. With Biden, there would be a visible change in the overall perspective of how the White House views the EU, and thus the Member States. However, that would happen in such an environment in which most of the president’s attention, at least in the first months, will be occupied by domestic agenda”, Picula explained in the interview.

As for Croatia within the regional context, Picula believes that it must be interested in shifting the focus from world politics to Bosnia and Herzegovina, where it is clear that the Dayton Agreement is an unfinished process, and farther to Southeast Europe or Western Balkans. “We need to see what Biden’s attitude towards the Balkan legacy of the Trump administration could be. How would Biden react to the letters of intent that Vucic and Hoti signed in Trump’s office? Will this have an impact on Biden’s Balkan policy? Will he ask for a revision on that? To me, those three documents signed at the White House are like rare blemished stamps.”

Since the specificity of this election lies in the fact that the election results will not be promptly known, Picula warns that: "This could be a much more serious constitutional issue if Trump makes his announcements that he will question the election result if that result does not suit him", Picula concluded.