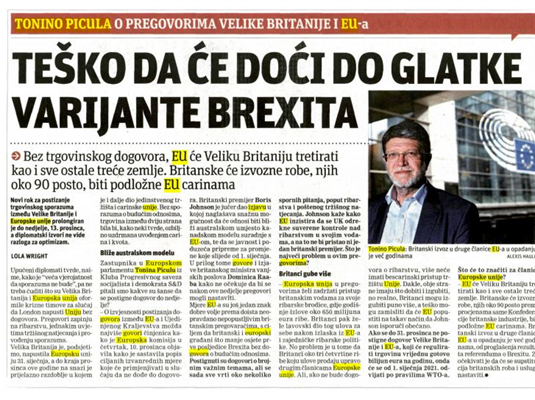 "The fact that the European Commission announced yesterday, Thursday, December 10, that it has compiled a list of reserve measures that it will apply in the event that no agreement is reached, speaks volumes about the certainty of reaching an agreement between the EU and the UK. The statements of the British Minister of Foreign Affairs Dominic Raab that he does not expect that the negotiations could continue after this week also speak in that favor", Picula revealed.

He also stated that “EU measures are another sign of goodwill towards the truly inconceivably unreasonable British negotiators, with the aim of making British and European citizens feel as little as possible the first consequences of a disordered Brexit. So, if no agreement is reached by Sunday, the measures that will come into force after the first of January 2021 are the provision of basic air traffic, so that air traffic can run smoothly for another six months if the UK agrees."

What remains, Picula explained, is ensuring an adequate legal framework for authorising reciprocal access for European and British fishing boats in the waters of other countries after the December 31st 2020, in order to ensure the sustainability of fishery because of its importance for the EU and UK citizens who live off that activity in many coastal areas.

Through his work in the Intergroup on Seas, Islands, Rivers and Coastal areas, Picula admitted that he continuously emphasizes the importance of ensuring adequate life conditions for all European citizens in those areas. “People who live from fishery work hard and it is therefore extremely important to help them save their positions and fishing activity. European Union wants to keep access to British waters for their fishing boats, where they annually catch around 650 million euros worth of fish. British people want a great part of that catch for themselves after exiting the EU and common fisheries policy. But the catch is that the British sell about three quarters of the fish they catch to other members of the European Union. But if there is no fisheries agreement, they will no longer have duty-free access to the Union market."

Asked about the consequences of the failure of the recent agreement, Picula concluded that both sides have something to gain and to lose, but realistically, the British have much more to lose and added: "The EU will treat the UK like any other third country. "About 90 percent of the Confederation of British Industry itself is subject to EU tariffs. British exports to other EU members have been declining for years since the Brexit referendum was announced. Substitution of British goods and services is expected to continue."