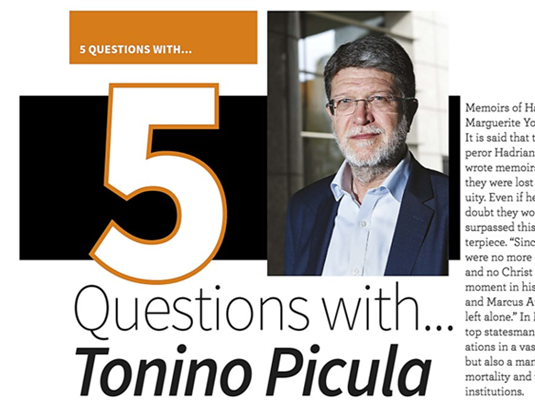 Tonino Picula spoke to Parliament Magazine about his favorite books and memories, but also about local politics

Croatian EPM Tonino Picula gave a short interview for the Brussels The Parliament Magazine in which he presented himself in a less formal manner.

We bring answers to the first two questions.

1. How would you describe your political/leadership style in three words?

Open minded, analytical, consistent. I respect the motto that says, “do what you can, with what you have, where you are.”

2. Is there anything you have personally achieved or done that would surprise people?

Foreign policy is an area of my expertise. I was the international secretary of my party during the Yugoslav wars and the Minister of Foreign Affairs in the Croatian government that directed Croatia towards EU membership. Nonetheless, I confounded the public opinion when I opted for local government as well. I was elected mayor of the city where I lived and thus gained valuable new experiences. Local politics is the politics that has always been closest to the people. American politician Thomas ‘Tip’ O’Neill once said that “all politics is local”.

"Those against every reform is a coward and those for every of it is an adventurer"
- Rufus Kurcije
"Do what you can, with what you have, where you are"
- Theodore Roosevelt
"In my Europe, Croatian producers have my support and their products access to customers"
- Tonino Picula
"I believe the principle that politics, regardless of it's best intentions, has no right to change people but change the conditions in which they live, for the best"
- Tonino Picula
We use cookies to give you the best online experience. By using our website you agree to our use of cookies.
Accept