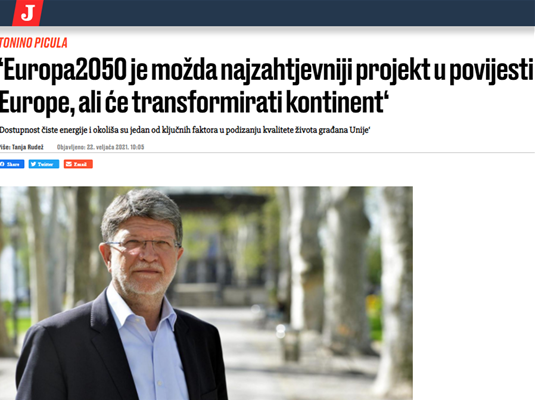 Croatian Member of the European Parliament and S&D Coordinator Tonino Picula answered three questions from Jutarnji list today, based on re-problematizing the extremely important topic of climate change, that is suppressed and ignored by the flaming pandemic

Asked whether 2021 will be crucial in the fight against climate change, Picula replied: "Every year before us, until we achieve the goals set through the Paris Climate Agreement, the Europe2050 agenda, or the goals of the European Green Deal that we strive to make Europe 2050 climate-neutral, is crucial.

It is politically, economically and sociologically perhaps the most demanding project Europe has faced in its history, and requires strong investment in renewable energy, far more efficient use of all forms of energy, and investment in the huge social costs of technological, economic and digital transformation of Europe. union over the next ten, twenty, and thirty years.

To this end, I am concluding the Report "Cohesion Policy and Regional Environmental Strategies in Combating Climate Change", whose final recommendations will articulate how to use cohesion policy and regional development funds for a fair energy transition and environmental protection based on the objectives of the European Green Plan, Paris agreement, and the recovery of the EU economy after the end of the pandemic.

Namely, the goal of cohesion is to reduce the differences between European regions and regions in the member states of the Union, and climate change is one of the reasons for the increase in differences between regions that cohesion measures are trying to reduce. That is why it only makes sense to invest in energy transition and environmental protection, in order to reduce the development gap where it is most needed: the availability of clean energy and the environment, which are one of the key factors in raising the quality of life of Union citizens."

As Chairman of the EP Intergroup on Seas, Rivers, Islands and Coastal Areas, Picula acknowledged that through his work in other EP committees, he regularly deals with environmental issues, biodiversity conservation and energy transition, from the perspective of cohesion, rural development and maritime development policy: “Over the past six years, with the participation in the establishment of the Secretariat for Clean Islands of the European Commission, I have provided a total of six million euros with my amendments to the European budget for pilot projects of energy transition of islands and later rural areas."

My office previously issued a guide to smart water management, “The Challenge: Save Water,” where, based on the experiences of islands, which are always battling drinking water savings, we made a series of recommendations on how to manage this most valuable resource more effectively.

As the pandemic has not completely blocked the necessary steps in non-health policies, Picula said conferences on joint ocean monitoring and the presentation of the Ocean Framework would be organized in the coming weeks to help companies measure and reduce the negative impact of their business on the environment and oceans.