COVID must not be pretext for authoritarian outbursts 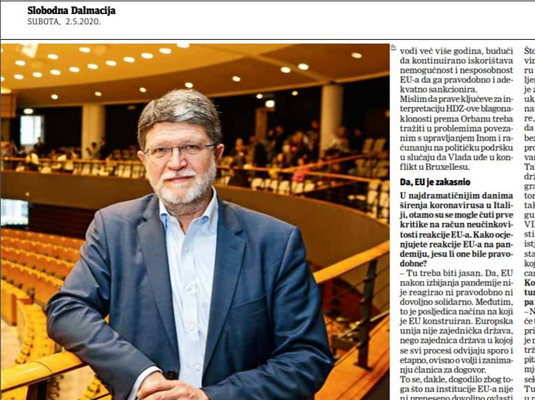 For Slobodna Dalmacija, Dalmiatia's weekly, Picula estimated that the government did not have a constitutional foundation for some of its decisions in managing the crisis

In an interview with Slobodna Dalmacija, MEP Picula commented on the EU's response to the crisis caused by the COVID-19 corona virus pandemic, especially in the tourism, mariculture and wine making sectors, as well as the strengthening of authoritarian tendencies in the EU, Croatia and Serbia.

How to "combine" aspirations for enlargement with some worrying processes, dangerous for democratic processes, in some countries from the"list"? Even you yourself are one of the signatories of the letter by which the MEPs warned of the "currently disturbing situation in Serbia"? In the pandemic, President Aleksandar Vučić further deviated from democratic standards, and at the same time continued with the policy of rapprochement with China and Russia, despite the process of European integration?

I joined the appeal of my colleagues because I believe that Vučić is using the crisis to test how far he can go in suspending the fundamental rights of his citizens, such as the right to move and the right to free speech, with them accepting it as inevitable. Along the way, he seems to be checking EU's tolerance as well. EU countries provided by far the largest assistance to Serbia (almost 167 m euros) in the fight against the COVID-19 pandemic. Vučić deliberately concealed its value, and had both directly and indirectly exaggerated the Chinese and Russian through his media services. He continuously balances between Brussels, Moscow and Beijing, playing primarily emotions of a section of voters who see Putin as an autocrat capable of offering simple solutions instead of slow and complex democratic procedures. However, he is neither the first nor the last to put his power before the interests of its citizens. The EU needs to register what is happening there, clearly demand adherence to democratic standards and encourage reforms. The EC reports register progress or regression of the candidates, and the new methodology of negotiations envisages penal provisions, as well as suspensions of negotiations if there is a regression.

Have you seen obvious abuses of power in Croatia as well? Have you gained the impression in recent weeks that the current situation in any aspect was an excuse for endangering freedoms and democracy in general?

The government was indeed trying to circumvent the principles of the rule of law and the constitutionality of some of its moves. When we talk about the otherwise widely respected work of the Civil Protection Headquarters, we must not forget that the Government only subsequently legalized its decisions, which was in fact proof of  the lack of its legality. Furthermore, one of the most glaring examples of attempts to undermine democratic standards during the fight against a pandemic is certainly the Government's attempt to allow urgent amendments to the Telecommunications Act to monitor citizens' cell phones without time limits and clear decision-making procedures. I am glad that enough critical mass has been created to force the Government to edit the proposal. There is also the issue of various procurement of protective and medical equipment, which are revealed to have been awarded without any criteria to suspicious companies. The authority of democratic institutions, especially in crises like this, is built by effective public policies and respect for democratic values, rather than by skipping procedures, using authoritarian actions, and strengthening repression. We had the opportunity to witness such a case in the police outburst against your colleague in Split. Crises require the responsibility of citizens, but even more the responsibility of the government.

Croatia has not joined a number of critics of the worrying measures taken by Hungarian Prime Minister Viktor Orban over the pandemic, who can now rule by means of regulations without a time limit. Can the fact that we are chairing the EU Council be a convincing justification in that sense, as Minister Gordan Grlić Radman says?

It can't. In Hungary, indeed, there was not only an attack on democratic institutions and a threefold division of power by Orban's Fidesz, but also the prime minister has fully articulated an authoritarian order within the EU. However, this is a process of cooking a frog that Orban has been carrying out for several years, as he continuously exploits the inability of the EU to sanction it in a timely and adequate manner. I think that the real key to the interpretation of the HDZ's benevolence towards Orban should be sought in the problems related to the management of INA and the counting on political support in the event that the Government enters into conflict in Brussels.