US turning to EU with Biden 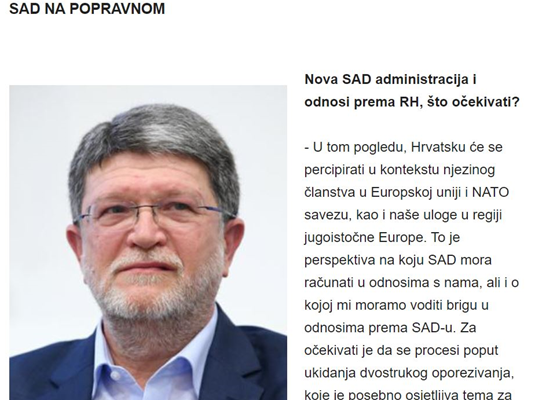 In his interview for Glas Slavonije, Picula analysed the US election results and potential new rapprochement towards the EU

When talking about the election process itself, which in the United States is extremely complex and burdened by institutional conservatism reflected in the existence of the electoral system, we can say it went quite smoothly, Tonino Picula, MEP and EP’s standing rapporteur for relations with the USA commented for Glas Slavonije and added: “this is evidenced by the fact that President Trump’s allegations of electoral fraud in some federal states were rejected by their governors, members of Trump's Republican Party. Similar happened with one part of his recount requests, which the courts rejected as unfounded."

Picula estimated that the USA will still perceive Croatia in the context of its membership in the European Union and NATO, as well as our role in the region of Southeast Europe. “This is a perspective on which the USA should count in relations with us, but we as well have to take care about relations towards the USA. It is to be expected that the processes such as the abolition of double taxation, which is a particularly sensitive topic for our technology companies, will continue and therefore finish long standing discrimination that Croatia, together with some other members of the Union, has unfairly suffered.

Over the past four years of Trump's mandate, foreign policy, as well as economic and environmental have predominantly been marked by persistent demolition of multilateral global order and American-European partnership. And it has been painstakingly built for over 70 years, on the ruins of the world after World War II.

Trump, for example, pulled the US out from the Iran nuclear deal, one of the most important security documents signed in the last decade. The US withdrew from the World Health Organization, and because of the interest of American fossil fuel industry and other pollutants that funded his campaign, it also withdrew from the Paris Climate agreement. Already in their campaign, President-elect Joe Biden and Vice President Kamala Harris announced the return to WHO and Paris Climate Agreement, in addition to turning to green economy and energy transition.

On the first day after the election, Biden presented a 13-member team to fight the COVID-19 pandemic and its consequences, which demonstrates that he considers it the biggest immediate crisis. Furthermore, Biden announced that he is planning to reaffirm relations with Europe. But this does not mean a return to the previous state, because the world has greatly changed in the past few years. The USA has been repositioning for years in respect to China and it is probable that Biden will have the same focus on China. However, considering that the EU has defined China and Russia as strategic rivals, it is likely that the question on policies towards these states will come to the agenda through revitalization of the partnership.