Serbia is exporting its crises to the neighborhood 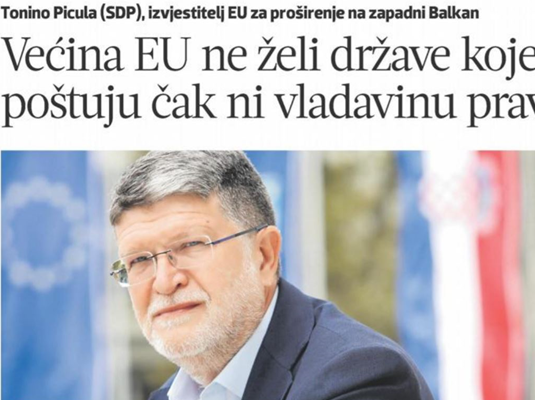 For the Večernji list, Picula analyzed the progress of the Western Balkan countries and the role of Commissioner Varhelyi in turning a blind eye to Serbia in the enlargement process.

How do you assess the report on progress of the candidate countries of the Western Balkans, especially Serbia? Does it correspond to the situation on the ground and your knowledge about it?

This year's progress report on the Western Balkans, presented this week at the European Parliament's plenary session in Strasbourg, basically confirmed the stagnation of EU enlargement policy. From this point in time, it is quite clear that this EU policy, once one of the most successful, reached its historic zenith in 2004 with the simultaneous admission of as many as ten new members. Given the significantly changed circumstances, it is hard to believe that some new ‘big bang’ enlargement, to the new Western Balkan members, will happen in the near future. Such an assessment is supported by the fact that we live in a period of a synchronised crisis on both sides of the EU's external borders. For the most part, the Union has no appetite for new members, as the EU has yet to find effective but also common answers to a range of next-generation problems posed by energy, technological, sociological and geopolitical changes. On the other hand, all candidate or potential candidate countries from the Western Balkans are clearly going through a period of internal turbulence intensified by pandemic pressure. Serbia, as the largest of these countries, deserves special attention in the analysis of the situation, because it often exports its internal controversies and unresolved issues of its own democratic transition to the neighborhood and thus contributes to the instability of the region.

How do you see the work of the Commissioner for Enlargement Várhelyi? He is very open - like Hungary - in supporting Serbia's entry into the EU, but what are the dangers if the criteria are lowered and that country is pushed into membership, like some other candidates, before the criteria are met? Do you think he is trying to do that?

The Enlargement Commissioner must be a representative of the fundamental values ??on which the EU is based and a capable operative in the search for solutions to the problems that burden individual countries in the accession process. As these are sensitive and often chronic deficits, the Commissioner must not have a different political agenda from that agreed in the Union institutions. In particular, it must not favor governments that are unwilling to respect the standards of the rule of law, freedom of the media and the fight against corruption and organized crime. Unfortunately, this is a time when the EU has not fulfilled its promises to those countries that have fulfilled the required preconditions for the start of negotiations, such as the North Macedonia and Albania. It would therefore be absurd to favor all those who persistently show serious deviations from the required democratic standards. Commissioner Varhelyji has been criticized these days for having double standards when presenting the situation in individual states. My impression is that during the debate with Members of the European Parliament, he did not do enough to dispel these doubts. What the vast majority of EU countries do not want at all is the admission of new members, which, due to some lowering of the accession criteria, would increase the number of already existing members marked by an increasingly serious deviation from the standards of liberal democracy.

On the other hand, negotiations with North Macedonia and Albania have not yet begun. What message does this send to those countries, but also to others in the region?

It is an inadmissible treatment of countries that have met all the required preconditions not for the conclusion, but for the start of membership negotiations. And not just any kind. North Macedonia has even changed its name, an example unprecedented in the history of enlargement policy. Kosovo should be added to these two deprived states because its citizens have not had their visa regime abolished, although Pristina has ratified the border agreement with Montenegro, which was also not a routine criterion for that purpose. The declared geopolitical ambitions of the EU must, above all, be confirmed in the Western Balkans, in its immediate vicinity, in order to be taken seriously by its geopolitical rivals, but also by its partners.

What is the impact of the US on developments in the region? Does the United States have the will and capacity to deal with the Western Balkans, or will the Biden administration take more care and keep the focus on domestic conditions, and in the foreign policy sense, on Asia?

Regardless of the primary focus of President Biden's administration on the domestic scene, as well as the foreign policy focus on China and the Indo-Pacific area, some appointments of officials involved in US mediation in Southeast Europe are encouraging. I would say that the US also has an additional responsibility to encourage more positive developments in this part of Europe due to a number of previous engagements in which it has participated. I believe that the partnership between Washington and the EU would help, above all, in overcoming the now permanent crisis in Bosnia and Herzegovina and renewing the dialogue between Belgrade and Pristina. It would be good if the more tangible results of America’s return to the Western Balkans could be felt before the mid-term election for Congress late next year.

How do you comment on the situation in the SDP and what is the future of social democracy in Croatia? Will you be more actively involved in the events in the SDP?

I hope that this period of serious internal turmoil in my party will end as soon as possible. Anything else would lead to further organizational collapse and political marginalization. In any case, the future of social democracy in Croatia depends not only on the SDP's capacity to rebuild but also on the political persuasiveness of those options that incorporate its values into political offer. And there is room for a new affirmation of social democracy in today's Croatia due to the character of the government, which is in a growing gap between the proclaimed European values and the practice that greatly calls into question. The SDP remains the framework of my political action, and circumstances will determine the type of my engagement. Today, I am working as an SDP member in the European Parliament, thanks to the vast support of citizens in the elections.