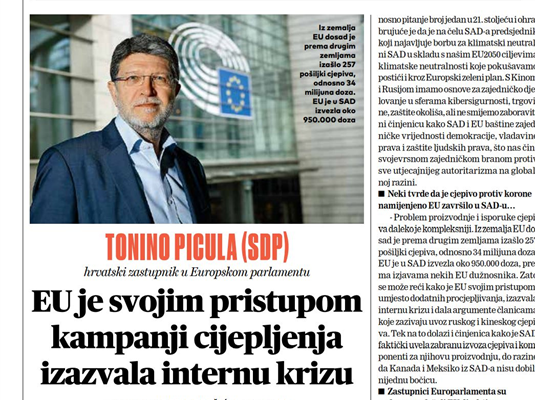 In an interview for this week's issue of Globus, Croatian MEP and EP rapporteur for relations with the United States, Tonino Picula, spoke about his report on the United States and the vaccine crisis in the Union. Read the interview below.

The European Parliament's Committee on Foreign Affairs has given you a mandate to start preparing a document of recommendations for relations between the European Union and the United States. What kind of document is it precisely? What are you currently doing about it?

The reason for drafting such a document is the fact that relations between the European Union and the United States have fallen to their lowest level over the past four years since the establishment of the existing global multilateral order and Euro-Atlantic partnership after World War II. Prior to that, for seventy years, the international order based on democratic values, open societies, and the protection of human and minority rights was the result of joint efforts by the United States and the European Union. The election of Joe Biden as President of the United States aroused optimism in the EU and provided a chance for a kind of reset of transatlantic relations. At the same time, in some areas, interests and approaches will inevitably differ, as was actually the case before Trump. The EU and the US must therefore rebuild mutual trust and agree on transatlantic working methods. Rebuilding the foundations will lead to a better political context for constructively resolving problems in which our interests objectively diverge. The recommendations will analyze the state of transatlantic relations, identify areas of common interest, as well as those where dialogue is needed to overcome differences. The ultimate goal is to formulate a series of recommendations for the Council, the Commission and the European External Action Service. I am currently consulting with a wider circle of colleagues from whom I expect political and expert input in drafting the document.

How would you evaluate the current relations between the US and the European Union?

The administration of former US President Donald Trump has been continuously making decisions and pursuing policies for four years, the direct consequence of which has been a serious collapse of transatlantic relations. From the trade and customs war that Trump struck at some of Europe’s most important export industries, through exiting the Paris Climate Agreement, all the way out of the World Health Organization in the midst of a pandemic because it didn’t fit his political goals or the Iranian nuclear deal. Trump did his best to inaugurate a new order in international politics in which he would make his former partners subordinates, in a kind of Manifest Destiny's venture towards Europe. Even before coming to power, the new US administration of Joe Biden and Kamala Harris made it clear that it plans to break with Trump's policy, addressing the EU as the main partner in respecting the multilateral order. By returning to the Paris Agreement, the WHO signaled how they intend to keep their word. But one should not waste time and wait for the US to resolve its internal problems in order to reshape its policy towards the EU. The European Union should have a political vision for shaping a new, common policy towards the United States, but also European systemic, strategic rivals within what we call strategic self-sufficiency within the existing partnership. This means strengthening the common European defense policy and creating new, more active policies towards Russia and China. Such a more coherent EU would also be a more reliable partner for the United States.

In which areas should special emphasis be placed on improving these relations?

The fight against climate change is the number one global strategic, economic, health and security issue in the 21st century and it is truly encouraging that the US is once again led by a president who does not deny the existence of climate change but announces the fight for a climate neutral US, in accordance with our EU2050 climate neutrality goals, which we are also trying to achieve through the European Green Deal. These policies will largely shape a whole range of other agreements and policies, both in our mutual relations and in our relations with third countries or blocs. I have already mentioned relations with China and Russia, where I believe that we have a basis for joint action in the spheres of cybersecurity, trade, environmental protection, but we must not forget the fact that the US and the EU inherit common values of democracy, rule of law and human rights, and what makes us a kind of common barrier against increasingly influential authoritarianism on a global scale.

Some claim that the coronavirus vaccine, intended for the European Union, ended up in the United States. Do you also have such information and how can it affect US-EU relations?

The problem of the production and delivery of vaccines against COVID-19 is far more complex than rumors that doses of vaccines intended for the EU have ended up in the US. On the one hand, delays in deliveries of AstraZeneca vaccine are due to insufficient production capacity and the fact that the European Commission has failed to enter into contracts with manufacturers that clearly oblige them to deliver the set quantities within strictly defined deadlines. On the other hand, 257 shipments of vaccines, or 34 million doses, have so far left the European Union for other countries, and only last week one of the 258 was detained in Italy before being sent to Australia. The EU has exported about 950,000 doses of the vaccine to the United States, according to some EU officials. Therefore, it can be said that the EU, with its approach, instead of additional vaccinations, caused an internal crisis and gave arguments to the members calling for the import of Russian and Chinese vaccines. So far, they have entered into partnerships with European rivals from their domestic politics. Only then comes the fact that the US has in fact imposed a ban on the export of vaccines and components for their production, to the extent that Canada and Mexico have not received a single bottle of vaccine from the US. Everything certainly affects the timing of production and delivery globally.

MEPs recently supported the Commission's proposal for an EU directive on minimum wages, describing it as an important step to ensure that everyone can earn a living from their work and participate equally in society. Is there a minimum wage at EU level or is it up to the Member States to decide for themselves?

The debate on the minimum wage continues with the debate on the minimum income, which began last summer amid decisions on pandemic assistance through the Next Generation EU program. The Commission’s proposal, which would make the minimum wage adequate should consist of at least 60 percent of the national median and 50 percent of the average gross wage, and should allow a full-time employee not to fall into poverty without additional state aid. I believe that is a measure that is welcome for all members of the Union, because the danger of a large number of citizens of Croatia and the Union falling below the poverty line is enormous. Especially at a time of declassified economies across the EU. I also support the initiative of the recently launched campaign of the European Federation of Trade Unions to expand protection through collective agreements to include as many workers in all industries as possible in trade unions and thus protect their income and labor rights.