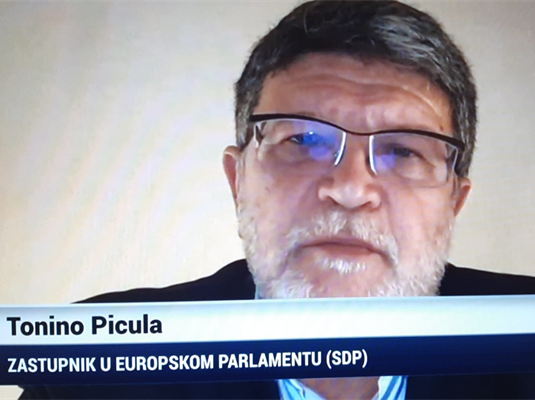 Croatian Member of the European Parliament and Chairman of the Intergroup on Seas, Rivers, Islands and Coastal areas, Tonino Picula, participated in a discussion on the Croatian Radio and Television's Otvoreno on December 14th regarding the current declaration of an exclusive economic zone in the Adriatic.

Asked if we were late in declaring the exclusive economic zone, Picula replied: “It was and remains a purely political issue. Its resolution depended on the political constellations and relations of the countries involved. In Croatia, the issue of declaring an exclusive economic zone has fluctuated depending on internal political relations in the last 17 years. It should be said that all relevant policy options agreed in principle on the need to fully protect national interests in the Adriatic, but differed in their assessment of timing and how to do so. I would say, regardless of these debates, the sea has always been and will be a multifaceted resource in the future. The Adriatic is particularly sensitive because it is a semi-enclosed sea which is in fact a bay, also of a semi-enclosed Mediterranean.

“Thus, with the exclusive economic zone, in 2003, we activated the ecological and fishing component of the EEZ, leaving only the use of wave energy and building artificial islands outside the reach of such a decision. Let me remind you that the beginning of the implementation of EEZ was scheduled for October 2005, that is two years after its proclamation. Such a decision represented a kind of striving for a good political and diplomatic balance between the necessity for protection of fishing and national interests, as well as avoiding any distortion in relations with the European Union at a time when an opinion on our application for membership was awaited.”

When it comes to experiences on proclamation of exclusive economic zones of other country members of the European Union, Picula stated: “The results of declared economic zones depend on the navy fleet strength, the capacity of exploitation of the sea and submarine, but above all on strategic focus on the sea. In addition, it is, of course, necessary to have the means for enhanced marine surveillance technology. The first country to assure its marine zone was Iceland in 1974, following the 1972 announcements. The European Union has the largest exclusive economic zone in the world, amounting to almost 22 million square kilometers, including some overseas territories, so it has twice the exclusive economic zone than the United States. Some of the country members of the EU also have very large marine areas and use them successfully, however, it should be said that the sea connects, but it also separates, so in this moment there are disputes between neighboring countries such as Spain and Portugal that contest each other's territories considered their exclusive position.