Picula's resolution on Ukraine put to the vote 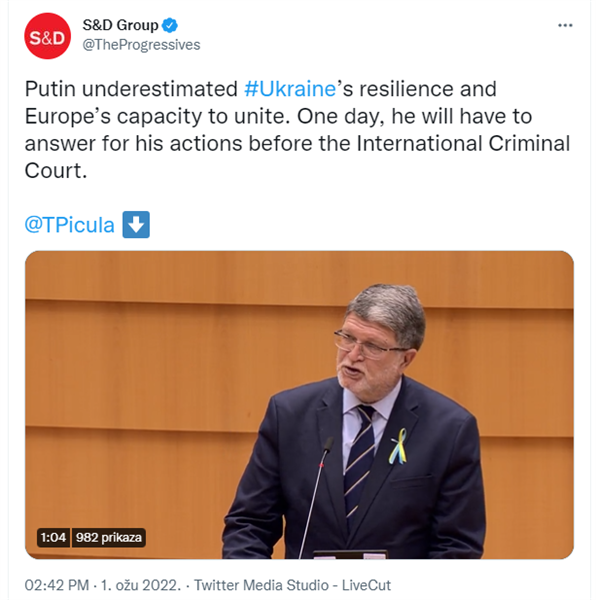 Today, the European Parliament adopts a Resolution on Russian aggression against Ukraine, after negotiations between the groups in the EP led by Croatian MP Tonino Picula. Below is the speech of MP Picula on the occasion of the adoption of the Resolution, and below are the key messages and measures of the Resolution.

"Yes, this war of Russia against Ukraine can be an introduction to the twilight of humanity, but also of a new, fairer international order. The primary reason for the war is the authoritarian nature of the Russian regime under the absolutism of the Russian president. It is not known which is worse, Putin's military aggression or his narrative justifying violence. Putin counted on the passivity of the Ukrainians and the division of the West. He overestimated his strength and underestimated the strength of the Ukrainian resistance and the ability of the West to unite. This war also evokes memories of the war aggression against my country, Croatia, thirty years ago. Attacks on children's hospitals, civilian facilities, destroyed places, and refugees. Like Milosevic, Putin must be held accountable for his actions before the war crimes tribunal. It will be very difficult for Putin to get out of this war. The Russian version of the Maidan could happen to the Kremlin. History has shown that dictators can be defeated, but it is equally important to eliminate the circumstances that led to the emergence of dictators. Ukraine is bleeding, but Putin's regime will bleed out. Long live European Ukraine, glory to Ukraine!”, Picula said as the only Croatian MP who participated in this debate. The key demands of the European Parliament towards the Commission and the European Council are to strongly condemn the illegal, unprovoked, and unjustified military aggression of the Russian Federation against Ukraine and the invasion of it:

To encourage continued diplomatic efforts to stop Russian aggression against Ukraine and find a peaceful solution based on respect for Ukraine's sovereignty and territorial integrity and the principles of international law, as well as its right to decide on future alliances.

The European Union must categorically reject Russian rhetoric suggesting a possible use of weapons of mass destruction and call on the Commission and its member states to provide Ukraine with further emergency humanitarian aid.

Furthermore, the Resolution emphasizes the need to place special emphasis on vulnerable groups, minorities, as well as women and children, and welcomes the swift adoption of sanctions by the Council; in light of the latest attacks, insists on the need for additional harsh sanctions. The European Parliament proposes the following measures:

• Encouraging the maintenance of a coherent approach to sanctions without any exceptions caused by sectoral or national interests;

• Call on the Commission to identify and facilitate the means and ways to address the economic and social consequences of sanctions on EU citizens;

• Invitation to the EU institutions to work on granting EU candidate status to Ukraine in accordance with Art. 49 Treaty on European Union and merit-based, while continuing to work towards integration into the EU single market in accordance with the Association Agreement;

• Call on the EU and the Member States to revoke software licenses for military and civilian equipment in Russia and Belarus;

• Call on the EU and its Member States to prepare a multibillion-dollar EU aid and recovery plan for Ukraine;

• Finally, to express our gratitude and support to the Russian and Belarusian citizens who have taken to the streets in recent days, risking their own safety, and to condemn the arrest of thousands of peaceful protesters and call for their immediate release. In addition, the EP proposes, in support of Ukraine, the following:

• to restrict, in particular, imports of Russia's most important export goods, including oil and gas,

• to impose secondary sanctions on banks using alternatives to SWIFT for related transactions or to impose similar sanctions on Russian banks or the banking system following the exclusion of the Russian Federation and Belarus from the SWIFT system, in order to prohibit fundraising or borrowing from European markets from secondary markets capital;

• a ban on access to EU public procurement for the purchase of goods and services originating in Russia and Belarus;

• a ban on the export of all high-tech products and strategic goods to the Russian market;

• immediately block and withdraw funding for all EU-funded research and innovation cooperation programs with Russia and suspend cross-border programs; to close EU ports to Russian ships;

• immediately ban the Russian-controlled International Investment Bank from operating in the EU;

• refuse access to all EU ports for ships whose last or next port of call is in the Russian Federation, except for duly justified humanitarian reasons;

In conclusion, from the Croatian perspective, paragraph 31 is important, which emphasizes Russian action in the Western Balkans and emphasizes their lasting interest in the instability of the region, and condemns all forms of support for Russian aggression. In the same paragraph, we condemn Serbia's non-compliance with EU sanctions against Russia, which is detrimental to its EU accession process. We reiterate our expectation from the candidate for accession to the EU to comply not only with the EU acquis but also with the Union's common foreign and security policy.