Picula: It is time to impose a full embargo on Russia 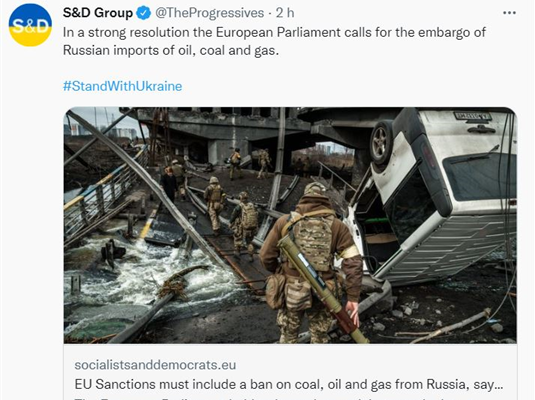 Picula's resolution on EU sanctions against Russia and their implementation was voted in the European Parliament today with 513 votes in favor, 19 abstentions, and 22 against.

"We have voted for a complete embargo on any kind of involvement of the member states of the Union with Russia. "Starting with a full energy embargo on Russian imports of oil, coal, nuclear fuel, and gas as soon as possible, we reiterated our call on the EU institutions to commit to Ukraine's EU candidacy to send a clear political signal of our commitment," said on the occasion of the vote on the Resolution on EU sanctions against Russia and their application Tonino Picula, the Croatian member of the European Parliament and chief negotiator for the resolution.

The resolution was passed with 513 votes in favor, 19 abstentions, and 22 against.

Picula clarifies the important points of the resolution: “We reiterated our support for the entire defense assistance to the Ukrainian armed forces, individually and collectively through the Instrument contributing to Stability and Peace (IcSP). At the moment, the rapid and efficient functioning of the European mechanism for resolving the economic and social consequences of the Russian war against Ukraine is extremely important. More than 4 million refugees fleeing the attacked country pose a huge and difficult challenge for the entire Union. Therefore, we have activated the Temporary Protection of Refugees Directive and called for the establishment of safe passages and humanitarian corridors for the evacuation of civilians, with a particular focus on unaccompanied children and persons with reduced mobility. Special attention needs to be paid to the situation of vulnerable groups, regardless of their affiliation."

We expressed our greatest support for the decision of the Prosecutor of the International Criminal Court to open an investigation into the situation in Ukraine on the basis of war crimes and crimes against humanity and stressed the importance of swift action in finding the necessary evidence and punishing crimes.

Finally, in the Resolution, we stressed the urgent need to seize all types of property belonging to Russian officials or oligarchs associated with the Putin regime and their proxies, Picula said.