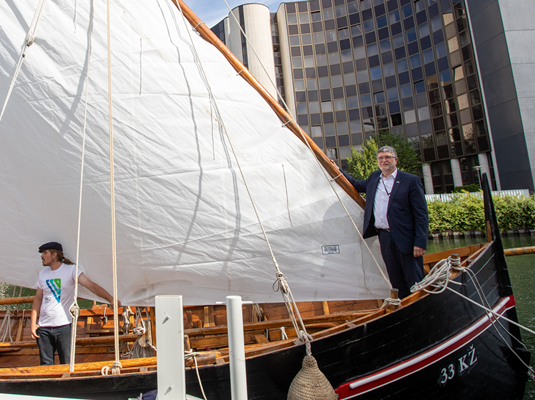 Traditional Croatian shipbuilding and its role in European recovery were presented in the European Parliament in Strasbourg at a two-day conference organized by Tonino Picula, from the mooring in front of the EP building, through an expert panel discussion, to the opening of the exhibition dedicated to falkuša.

"Gajeta falkuša is not just a ship. It is also the collective memory of the small town of Komiža in the southwestern bay of the island of Vis in Croatia. At the same time, this ship belongs to the Mediterranean universe, both by its origin and by the universally understood terminology in the Mediterranean maritime world. That's why Falkuša is not just a historical ship, but an example of the best response to the challenge of survival - and it is a legacy and potential for our future and development", said a Croatian member of the European Parliament today at the conference "Terra Marique - Heritage in Support of European Recovery", Tonino Picula, whose office organized the conference and exhibition "25 years of Falkuša "Comeza-Lisboa": Lisbon EXPO 1998 - Strasbourg European Parliament 2022".

Along with a photo exhibition and a conference, where Croatian and experts from the Netherlands, Spain, Italy, France, and Poland spoke about the experiences of using maritime heritage in the revitalization of local communities.

"From falkuša we can and must draw inspiration for answers to many of our current and future sustainability challenges: from the way we use natural resources, from building materials to the energy we use for movement, to the footprint we leave behind," said Picula. "On July 1, 2013, we unfurled the Croatian flag in front of the European Parliament in Strasbourg because the Republic of Croatia joined the European Union. Today, for the first time, we unfurled the Croatian sails in front of the European Parliament, because the falkuša gajeta landed next to the dock of the building that symbolizes the unity in the diversity of the local communities of the European Union", said the representative.

Professor Nenad Bobanac, one of the researchers, who, along with Professor Velimir Salamon, participated in the construction of the falkuša, together with Professor Joško Božanić, explained that the entire project of building the falkuša was a holistic, interdisciplinary, unique experience. "The project started way back in 1986 when the old falkuša Cicibela sank in Biševo. Then Prof. Božanić announced the construction of a new falkuša. We researched all components of construction, from old contracts for the procurement of materials to all other heritage related to falkuša. This was a project in which we tried to get information about the Adriatic towns, and we also held lectures during the nineties, when nobody thought about culture, we cared about preserving the heritage. It was very difficult to convince people of the need to preserve the old ships because the new ones were simpler to maintain, but we found enthusiasts in Komiža, Betina, Komin, Murter, and Rovinj. This led to the revitalization of the entire traditional shipbuilding industry on the Adriatic and their local communities", explained Bobanac.

Professor Božanić said that today the falkuša is a protected symbol of Croatian and Mediterranean cultural identity, but it is not only that, it is an inspiration for the future and survival: "The falkuša is not a story about a dead ship and ancient times. Falkuša is a story about our time, about survival, about fishermen who were also persecuted by their native Venice, because they dared to fish in the open sea and sell fish outside of Venetian jurisdiction. Despite these attacks, the people from Vis survived, and this is a message to us that we can also defy troubles".