EU must be more firm towards China in the Western Balkans 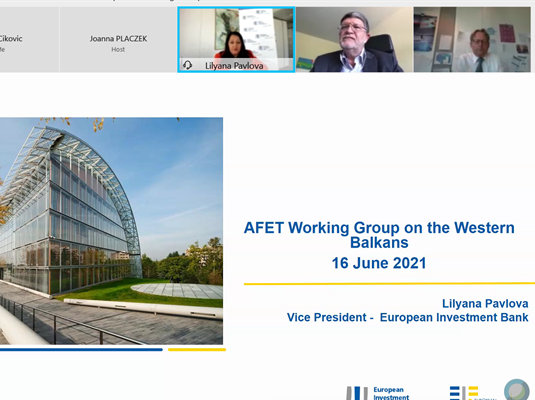 The EU must continue to develop convincing financial and political mechanisms that will bring the countries of Western Balkans closer to the membership, in order to avoid those countries falling under a significant influence of the Union’s geopolitical rivals”, said Tonino Picula, Croatian MEP and Chair of the Working group for the Western Balkans during today's meeting

Picula was the keynote speaker at the meeting, attended by Lilyana Pavlova, Vice President of the European Investment Bank, Thomas Hagleitner, Head of Unit for Montenegro, Directorate-General for Neighborhood and Enlargement Negotiations, and Vladimir Shopov, researcher, advisor and founder of the Institute for Asian Studies New Bulgarian University in Sofia.

The purpose of this meeting was to discuss the financial situation of the Western Balkans in the context of foreign investments and external debt and their short-term and long-term impact in the region. These are events that have recently attracted a lot of attention in the European institutions, especially due to China's influence in the region, with an emphasis on the case of the situation of Montenegrin exposure to Chinese debt as a result of the construction of the highway. All this took place in respect of last year's economic decline of 3.3 percent in the region as a result of declining revenues from tourism and activities in the SME sector.

As a keynote speaker, Picula stressed the need for reasonable funding for EU candidate countries, a deeper analysis of China's controversial situation with Montenegro, and statedv that the meeting came at the right time, as IPA III, a pre-accession financial instrument that will provide candidate countries with more sustainable and rational support on their path to the EU, was recently voted on.

At the beginning of her presentation, Lilyana Pavlova pointed out that the European Investment Bank strongly supports the transition of the Western Balkans to a more inclusive, greener and sustainable model with concrete and efficient financial resources: "In 40 years of activities, the EIB has engaged in economic harmonization in the region, digital reforms and technical assistance, renovating hospitals and schools while helping small and medium-sized enterprises to make the market more dynamic and transparent.”

Thomas Hagleitner commented on China's growing influence in the region, the desire to eliminate regional disparities and stressed the need to create fiscal space in the Western Balkans to implement the necessary reforms and thus ensure macroeconomic stability.

"Transparent public procurement, the impact of investments on the environment, the modus operandi of Chinese loans, are all very important matters that require the expertise of stakeholders from the rest of the EU. In a small country like Montenegro, which often lacks experts, it is very important to draw up a smart plan for the necessary reforms and find optimal investment guidelines", said Hagleitner.

Vladimir Shopov thoroughly analyzed the very demanding circumstances in which Montenegro currently finds itself. "Significant characteristics of this country are largely reduced to geopolitical ambivalence resulting from unequal integration. The development gap has made Montenegro extremely vulnerable, opening the door to China's growing presence. "China's entrenchment in the region is unquestionable, but this is not only about China's economic ambitions, but also about its tendency to expand its cultural and media ties not only to the Western Balkans, but also much wider," Shopov said.

Chinese activities are no longer just ad hoc, they are systematically integrated into a number of sectors, Shopov emphasizes and assesses that China also wants to show a friendly face, through the placement of coronavirus vaccines on the global market.