The political will of Montenegro citizens must come to the fore 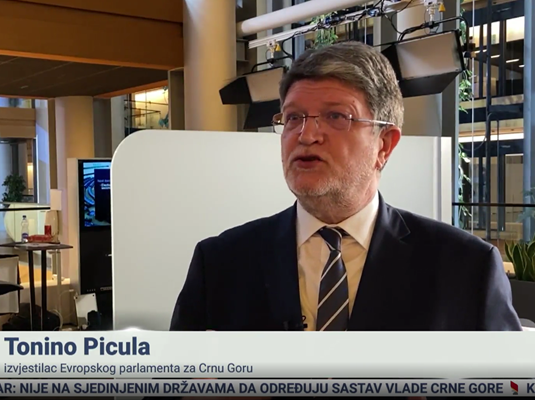 On January 19, Croatian member of the European Parliament and EP's rapporteur for relations with Montenegro, Tonino Picula, commented on the problematic developments in the Montenegrin government for Montenegrin TVCG.

Picula found that "the proposal to create a minority government has ambition, but its success requires support in Parliament."

As for the views of some parties that creating a new majority would mean changing the electoral will of the citizens, Picula commented that the practice of forming a minority government exists, but such a political move is rarely met with applause. "Different political actors sought their place under the sun, they measured much more strength with each other than with the problems facing Montenegro."

In a joint statement with MP Vladimir Bilčík and Special Representative Miroslav Lajčák, it was concluded that political stability is needed to accelerate integration, and the current proposal to form a minority government is a reflection of an extremely fragmented political scene.

"This is a project that has its ambitions, and the support of MPs is important for its success, and the success of this initiative will be confirmed by MPs. If it gets support, we can say that the proposal has found fertile ground," Picula said.

He emphasised that the attitudes of some ruling parties also mean changing the electoral will of the citizens.

"These are interpretations of one political move and it is obvious that not everyone will applaud it, depending on how much they recognize themselves in the proposal. And Montenegro has lost valuable time for progress on the European path," Picula concluded.

Picula also said that despite the high support of citizens for EU membership, apathy and dissatisfaction with political options have been evident lately, which is why it is necessary to support any proposal that will respect European standards and European ambitions.