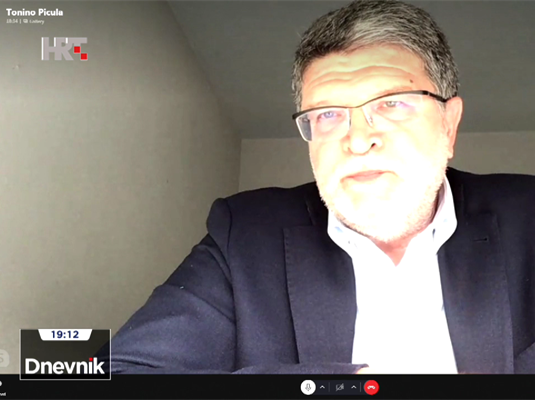 Tonino Picula, Croatian member of the European Parliament and president of the EP Working Group for the Western Balkans, was a guest on the controversial topic of the European Union's enlargement policy in last night's central Dnevnik of HTV and in this morning's show "U mreži Prvog" by Croatian Radio.

In a guest appearance on HTV's Dnevnik, Picula said that the expansion of the European Union was greatly influenced by the collapse of the Soviet Union in the 1990s, as well as by the attempt at its violent reconstruction.

Since Croatia became a member of the EU on July 1, 2013, the enlargement process has stalled due to the lack of reform progress in the candidate countries and the lack of political will on the part of the current members, who are preoccupied with multiple crises, he said and emphasized that it is high time for a new dynamism of the enlargement policy.

It is difficult to forecast the result of this process and the pace, but if someone should be given priority in the Western Balkans, it is North Macedonia and Albania, Picula pointed out.

When asked what brings Ukraine the candidate status, Picula said that the Russian invasion of Ukraine finally turned EU enlargement into a geopolitical process.

In the broadcast of "U mreži Prvog", Picula said that obtaining the status of a candidate country for membership in the European Union for Ukraine is an expression of really strong political support of the most economically powerful bloc in the world, and it is a very clear signal to Ukraine that after the end of that process, it will also to be a place in the EU, which is also a unique expression of support for a country at war.

"What underlines the geopolitical background of this decision is that the Commission did not recommend for Ukraine, as well as for Moldova, the imposition of any conditions that these countries should fulfill before being granted formal candidate status," Picula explained, adding that, on the other hand, " unlike some other countries that are in the waiting room, Ukraine has implemented 78% of the acquis of the EU, and it is about rules, standards and norms, which indicates that it has this capacity regardless of its position and the aggression to which it is exposed, and overcomes the necessary acquis communautaire."

"The decision to recommend candidate status for Ukraine certainly heralds serious changes for the entire European Union, which will not be so easy to achieve because the acceptance of such a large country can change the balance of power in decision-making. Ukraine, as a member state, would still have a great weight in policies adopted by qualified majority voting."

About how united the EU member states are regarding granting candidate status to Ukraine, Picula said: "The main retarder of the enlargement process was the French President Macron, and after the presidential and parliamentary elections, the support of France came along. In addition, I do not believe that the Netherlands and Denmark, which are traditionally reserved when it comes to enlargement, will oppose it."

Picula also commented that it will be interesting to follow the position of Austria and Slovenia at the Council this week, which of course have nothing against Ukraine, but are looking for a precedent decision for Bosnia and Herzegovina as well. However, the common position of the three main member states, France, Germany and Italy, will prevail in favor of Ukraine and Moldova.

When asked whether the admission of Ukraine to the EU will also speed up the expansion to the Western Balkans, more precisely BiH, Picula said that this policy became secondary after the big bang enlargement in 2005, and now it is finally back on the high agenda, but as far as Bosnia is concerned and Herzegovina, unfortunately, that country does not yet have the capacity to solve its internal political problems. "The European Commission's geopolitics works in two directions, but above all it is forced to intervene in favor of countries that are directly exposed to war."