No place for misconceptions in the new EU enlargement strategy 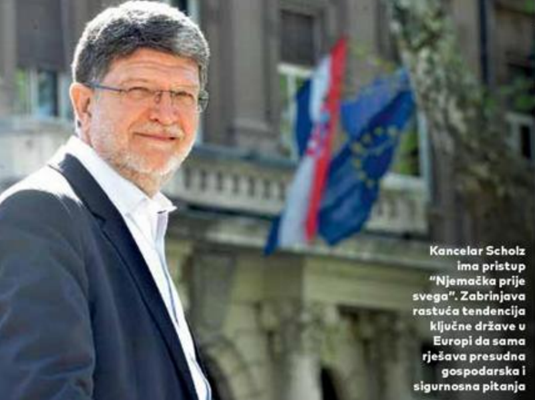 Tonino Picula, the Croatian member of the European Parliament and author of the Report with recommendations for the new European Union enlargement strategy, gave an interview to Globus about the aforementioned and analyzed Serbia's relations with the EU and with Russia, sanctions against Russia, the energy crisis, the tendencies of Germany and France, as well as the state of local politics.

Below is the interview in its entirety.

In your opinion, will the government of Aleksandar Vučić in Serbia be emancipated from Putin in the foreseeable future so that Belgrade does not end up in even greater political isolation from the European Union? Does Vučić have the courage to do so, considering the great sympathy of the Serbian population for the Russian ruler?

It is quite obvious that for a long time Serbia has been torn between its ambition toward the European path and its historical preference for Russia, which ultimately results in a kind of paralysis. However, in order to achieve some significant steps forward, it is necessary to have secure foundations, such as a stable economic, energy, and political picture. Serbia does not have that and is almost completely dependent on Russian energy sources on the one hand and on financial packages of pre-accession aid from the European Union on the other. Therefore, Serbia is now faced with serious ultimatums and will have to decide without delay whether it will continue to receive financial support from the European Union or energy supplies from Russia. Sitting on two chairs will no longer be possible, especially not after the brutal Russian aggression. As for endangering Vučić's position, it is inevitable that his autocratic rule will be replaced in the near future either by someone democratic and prudent or someone irrational. If this last scenario happens, Serbia will remain isolated and sink even deeper into economic and political depression, regardless of the sympathy of a significant part of the Serbian citizenry for the Russian Federation.

What do you think of Macron's project of a European political community, which includes all European countries from Iceland to Azerbaijan, except Belarus and Russia? Many suspect that this initiative of the French president is just a means to slow down the EU enlargement process.

I am skeptical of the French president's proposal to establish a European political community, not only because of the potential slowdown of European enlargement but also because of the fact that it will be almost impossible to form a single structure that would position itself exactly between the rigor and efficiency of EU institutions and the looseness of a simple political forum. Although a significant share of the members of the European Union belongs to one or more other organizations, such as NATO and the Organization for Security and Cooperation in Europe, even despite the fact that another diplomatic corridor could enable finding an area for cooperation in a series of disputes, Macron's project simply encroaches on the procedures, structures, and idea of ??the EU, especially since he is the president of France, which has been one of the leaders of the Union as such from the beginning. Likewise, I do not consider the idea good because a wide network would also imply a more diverse set of political figures, and the danger is that, with so many interests at play, none of the interests would ultimately be fulfilled.

In your presentation in the European Parliament, you warned that it is vitally important for the European Union to maintain solid political unity in this war crisis in relation to the Russian aggressor campaign. But we see, when it comes to energy and economy, that there is no such solid common policy. Germany has decided to help its citizens and entrepreneurs with up to 200 billion euros, which gives it a big advantage over other member states. Are the criticisms of Chancellor Scholz justified for implementing the "selfish" policy of "Germany first"?

In the European Union, member states are divided on the extent of sanctions against Russia and the best ways to control the rising cost of living and the energy crisis. As a result, cracks in the unity of the community began to appear. Europe is deeply shaken by the consequences of the Russian invasion of Ukraine, and although Scholz's moves to mitigate the jump in energy prices in Germany, show solidarity with Ukraine, and enable the delivery of weapons are concrete and purposeful, they undoubtedly reveal that Chancellor Scholz is paving his own path for Germany. His approach is clear - Germany first. Although the EU was already faced with divergent approaches to the solution during the corona crisis, the challenge we are facing now is again characterized by uneven strategies for solving the new crisis. Some countries have deeper pockets than others to deal with the hardships, and this unbalanced approach makes matters worse as a race for subsidies is launched between member countries. A more democratic attitude would make much more sense than a one-time financial injection. But, apart from the details of Scholz's proposal to curb energy price spikes, what is most worrying is the growing tendency of a key country on the European continent to solve crucial economic and security issues on its own, which could very well undermine European cohesion.

In this severe energy crisis, should the European Union apply the model of joint procurement of energy sources?

Yes. The EP recently adopted a resolution initiated by our S&D group, where we demand a ban on market manipulation of energy prices, as well as the punishment of those responsible. In addition, together with colleagues from other groups, we asked the Commission to apply the SURE aid package, designed as part of the COVID measures, to help citizens and small and medium-sized enterprises faced with a huge jump in energy prices. Following the same line of thinking, we demand that, as in the case of the procurement of vaccines for COVID at the EU level, we also jointly procure energy sources, because this is where the possibility of great savings lies.

How do you view the policy of the Croatian Government in this European energy and economic crisis? The government's aid package for citizens and entrepreneurs reaches six percent of the annual Croatian GDP and is comparatively the largest in the EU. Realistically, would any other government, for example, that of the SDP, act differently in a crisis like this?

Surely. Until now, HDZ's measures have been horizontal or even effectively regressive, the best example of this is the latest tax breaks, with which those with the highest incomes are rewarded the most. It turns out that these HDZ measures are extremely generous, but they do not change the status quo. The left-wing government would apply measures aimed at the most vulnerable, the main goal of which would be to alleviate energy poverty because the existing voucher program is not comprehensive enough. Furthermore, almost 22% of people in Croatia are at risk of poverty, which is why we must invest in comprehensive programs, from strengthening social protection, through access to health care to education, for which crises like this are an additional incentive and opportunity, especially with the fact that as a poor country, we are the biggest winner of the budget period 2021-2027. Finally, the SDP has already opened up the topic of redistributing the tax burden from labor to capital, which includes effective taxation of real estate for rent, which should help to heal the structure of our economy in the long term.

In your opinion, what is the probability that by the next parliamentary elections in Croatia, the two left-wing parties, SDP and Mozemo, together with smaller centrist parties, will create a common bloc, and would such a coalition have a chance to compete with HDZ? Some in the SDP believe that the strongest left-wing party should go to the elections independently. Do you agree with them?

If we analyze the history of SDP's election strategies in the last twenty years, it shows that we were more successful in coalition arrangements. Unfortunately, HDZ was defeated only twice, only when the opposition parties led by SDP managed to agree on a joint appearance in the parliamentary elections. And the current relations on the political scene point to the need for some combination of parties with similar value profiles. I believe that in the time until the next elections, there will be, first of all, a broader consensus among the citizens themselves about the need to replace this kleptocratic, clientelistic, and corrupt government of the HDZ and its satellites. The SDP and options close to it must respond to such a consensus with a consensus on the electoral strategy and vision of a more successful Croatia, which would send the HDZ into the opposition for a long time. Everything else would be equal to the individual dying of beauty with a look in the mirror.