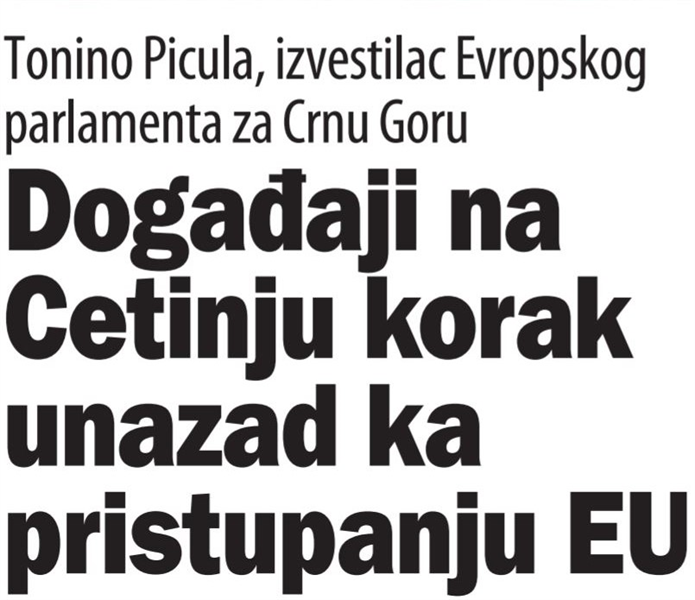 On September 8, Tonino Picula, Croatian MEP and standing rapporteur for relations with Montenegro gave an interview to the Belgrade newspaper “Danas” on the topic of the brutal events in Cetinje on the occasion of the enthronement of SOC Metropolitan Joaniki II.

“The enthronement of Metropolitan Joaniki II. is a religious act that should be deprived of political implications. Regardless of the fact that Cetinje, as a location of enthronement in history, was also a place of schism, religious manifestations must not be abused for political purposes. The freedom of action of religious organizations and the feelings of religious people should be respected, taking into account that freedom of expression is inviolable”, Tonino Picula stated, adding that “respect for Montenegro’s multiethnicity should remain at the forefront along with dedication to preserve a solid position that this country obtained in the european surroundings.”

When it comes to the long-standing correlation between church and state in Montenegro, Picula assessed: “Modern democracies have concluded long ago that success must be based on social inclusion and strong political will devoid of religious interference. Too close a connection between church and state can be a suitable combination only for those who are deeply involved in those categories, while leaving everyone else aside. Likewise, such a rejection of secularization as a meaningful achievement can only benefit nationalist elites who use such situations for tangible or intangible benefits. And in light of the negotiation process for Montenegro’s accession to the European Union, this is unfortunately a step backwards. Political and religious officials in Montenegro have a special responsibility to citizens who have expressed a strong desire to join the European Union and who hope that their efforts will not be undermined. Therefore, we hope that all actors will prudently and committedly reduce tensions and support Montenegro’s commitment to creating a modern, democratic, multi-ethnic and multi-confessional society. In addition, the political instrumentalization of religious beliefs is not in line with Montenegro’s current reform process and its successful interventions to date. We really hope that this situation will not jeopardize the international position of Montenegro and the long history of peaceful coexistence between people of different religions and ethnic groups in the long run.”

Regarding the role of the West and NATO’s support, Picula commented: “I believe that the enthronement of the metropolitan in such complicated circumstances certainly had to be carried out under increased security supervision. In order to avoid all possible risks, it is quite understandable that this partnership can and should be concretized in certain situations. I sincerely hope that all those involved will find a way to establish a constructive dialogue in the European spirit as soon as possible and end the tensions peacefully."