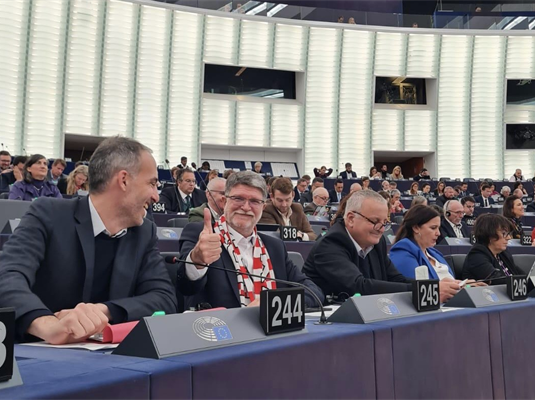 The expansion of the EU to the Western Balkans is in Croatia's strategic interest. “When we have members of the Union on all our borders, this will enable Croatia to develop in peace and stability”, emphasized the Croatian MEP.

In today's vote, the European Parliament adopted the Report on the New European Union Enlargement Strategy, authored by Croatian MP Tonino Picula, with 502 votes in favor, 61 abstentions, and 75 votes against.

"The new EU enlargement policy and internal reforms go hand in hand. Moreover, the enlargement process will help to improve the Union itself, but the rule of law must be at the center of that process. We should strategically apply targeted conditionality for candidate countries based on progress benchmarks. This means rewarding reforms in a timely manner and reacting to setbacks or continued lack of progress. In this context, we must emphasize the need for candidate countries to comply with the EU's common foreign and security policy. I worked on this report for a long time due to the fact that the enlargement of the European Union, especially in the Balkans, is a strategic Croatian interest. When Croatia will have EU members on all our borders, then we will also have a peaceful and stable neighborhood," Picula pointed out on the occasion of the adoption of the Report.

He also emphasized that membership in the European Union means more than EU funds and transport corridors and, above all, represents a set of values and principles that must be respected.

Previously, the MP's Report on the new EU enlargement strategy was adopted in October by the EP Foreign Affairs Committee, and the novelties proposed in this document particularly emphasize the need for clear deadlines for the completion of the negotiations, which should be finalized by 2030 at the latest.

In addition to the deadlines, the Report emphasizes the introduction of a qualified majority of members in deciding on areas relevant to the enlargement process, the abolition of the requirement for unanimity in the decision to open the negotiation process, and the creation of a special working group for the rule of law that will be entrusted with the development of more significant and effective support for the candidate countries and their potentials, with the active participation of judges and prosecutors of the member state, as well as the appointment of a chief negotiator for each candidate country, which would make the enlargement process more transparent, especially when communicating with the citizens of the candidate country.

Also, in the Report, it is stated that the harmonization with the EU's common foreign policy is a condition for remaining on the European path. This means that accession negotiations with Serbia can progress only if Serbia complies with EU sanctions against Russia, and the EU would also have to review its funding for the Serbian regime. In the case of Montenegro, if there is a significant setback in the fulfillment of the promised reforms, the EU will have to react accordingly to such weakening.

In his speech before the vote on the Report, Picula emphasized again that enlargement is becoming an important geopolitical and strategic policy and in this sense, it is necessary to ensure continuity, consistency, credibility, and influence.

"Intermediate steps of integration do not replace but facilitate the final goal of full membership in the EU. My last remark would be addressed to the citizens of candidate countries for membership. Most of them, or rather in all but one country, support EU accession. By fulfilling its obligations and showing political leadership, the EU must show its current and future citizens how it can and wants to carry out its historic mission. By working together and making firm recommendations for the future implementation of the enlargement policy, we can once again set standards that will allow the Union to grow and progress. We want to ensure that the EU remains a developing community of European states that is open to the accession of like-minded democracies that share common values and interests," he concluded.