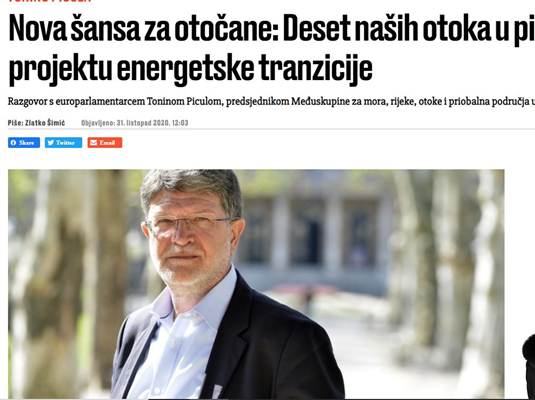 Below are some of the answers from the interview given by Croatian MEP and Chairman of the Intergroup on Seas, Islands, Rivers, and Coastal Areas Tonino Picula for Jutarnji list linked to the topic of the energy transition of the islands.

1. Mr. Tonino, you are one of the founders and now the Chairman of the Intergroup on Seas, Rivers, Islands and Coastal Areas of the EP. How many MPs do you gather and what problems do you deal with?

The Intergroup was established with the scope to put on the political agenda of the Union the resolution of specific problems encountered by more than 22 million European islanders. Today, there are 104 of us representatives, from as many as six EP’s political groups. Among the main successes are the establishment of the Secretariat for Islands of the European Commission and procuring the budget for its work in order to allow the islands to develop energy transition projects.

2. What were the central themes of this week's fifth EU Clean Energy Forum?

We dealt with the role of the EU institutions in creating favorable conditions for the transition to renewable energy resources, technological innovations that will enable that transition, and from the islanders we heard some great examples of good practice.

3. In the budget for pilot projects of energy transition of islands worth four million euros, there are also ten Croatian islands. What is their part in the project?

The first six islands announced their strategies together last year when Split and Hvar hosted the 4th Forum. At that point they announced that by 2040 they will have carbon-free electricity. Brač, Korčula and Hvar announced their carbon neutrality agendas until 2030, 2035 and 2050 as part of the Forum this week.

4. What is the role of the islands in the EU’s next “green and energy sustainable seven-year plan”?

The islanders have specific insights on life in the conditions of the energy privation, what makes them good teachers to others. We are now working on enabling the islands to receive a special status and to secure for their projects 1 percent of the Just Transition Fund in the amount of circa 250 million euros.

5. How much are other countries investing in their islands and where do we stand?

Considerable number of our islands are connected to water utility and electrical infrastructure, which is not the case with the majority of the European ones. However, the energy-generating products are still too expensive. It was not until recently the problem of transportation of children with special needs for treatment on the land was solved.

6. In which sectors does the government need to be more enterprising and forthcoming?

7. The changes in SDP have not had a positive impact on the party’s rating. What solutions would need to be offered to voters to recognize social-democratic pathways?

The changes have stopped the decline of the rating. After consolidating internally, SDP must offer policies for solving precarious work, right for workplace, social and health security for the new categories of workers. And all of the things mentioned have to be in terms of building a sustainable green and digital economy.