Restoring EU credibility should be the biggest success of Zagreb Summit 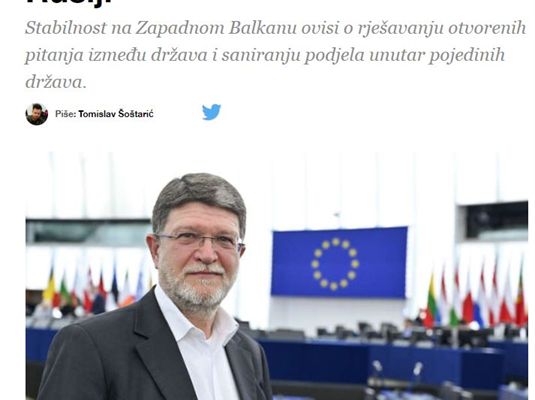 In an interview for Al Jazeera Balkans Picula analyzes the achievements of the new enlargement policy and opportunities for countries candidates.

"The biggest success of the Zagreb Summit would be to re-establish the EU's foreign policy credibility in its relation to its closest neighborhood, that is, to open the negotiations with Albania and Northern Macedonia, which have so far deserved it. Even greater success would be the return of a credible EU foreign policy more broadly, as using the neighborhood enlargement policy would show that we have the vision and the inner strength to reflect on the broader global context in which the EU currently stands", Tonino Picula said in big interview for Al Jazeera Balkans.

He also assessed the beginning of the Croatian EU presidency: "Looking at the first activities and messages that came from Zagreb during the last month and a half of Croatian presidency, my impression is twofold. From the perspective of the topic of enlargement, I am pleased that the Croatian Government is consistently sending the message of the necessity to continue the enlargement process, especially in the light of topening the negotiations with Albania and Northern Macedonia.As a European Parliament rapporteur for the Western Balkans recommendations ahead of the Zagreb Summit and EP rapporteur for Montenegro, I welcome the Government's engagement as it is indeed in Croatia's foreign and EU interest to stabilize its neighborhood and proves to be able to cope with much larger geopolitical challenges, through enlargement policy, After all, enlargement policy has proven to be the EU's most successful foreign policy tool.

On the other hand, it is at least to say, controversial, how Andrej Plenkovic's government treats the European Green Deal. The Croatian Government did not relinquish its sponsorship of the Presidency and they accepted it from INA, an oil company that is realistically managed by the Hungarian MOL, with whom the Republic of Croatia disputed on the management rights at INA at international arbitrations and lost. In addition, the Croatian Parliament will host lobbyists from the International Association of Oil and Gas Producers and the European Energy Forum on Monday, February 17th, to meet with Minister of Environment and Energy Tomislav Čorić to discuss the role of their industries in the European Green Deal. This same MOL is actively lobbying for new oil and gas production projects in a situation where we are trying to work on policy-making aimed at a carbon-neutral Europe by 2050".